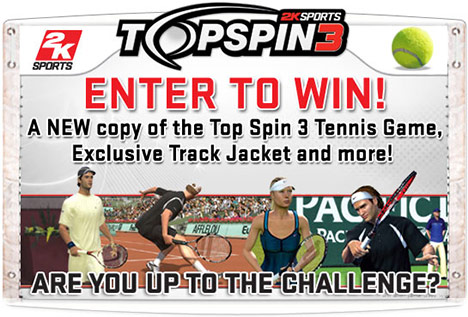 The wide world of sports — as a gaming genre, and in general — doesn’t get much love on Destructoid. But those of you who do follow tennis surely are aware that one of the sport’s Grand Slam events is currently under way: Wimbledon, the annual grass court tournament in London. Wimbledon has been going for a week, and Top Spin 3, 2K Sports’ new tennis sim, was released in North America last Tuesday (side note: keep your eyes peeled for an upcoming Destructoid review).

So why am I blathering on about an event and a game that very few of you care about? Well, here’s where things get interesting. Courtesy of the good people over at Rocket XL and my colleague Jim Sterling, I’ve got a doozy of a contest for you all. Here’s what’s being offered:

That’s not a bad haul, now, is it? If you’re still reading, then you’re probably wondering how much of an ass you have to make of yourself in order to be eligible to win. Well, all you have to do is take a photograph at an actual tennis court. The photo has to include one simple thing: you hitting (or attempting to hit) a tennis ball with a sports implement that is not a tennis racket. Run with that.

The funniest and most creative picture will win; I will select the two runners-up as well. Let me be clear: these photos cannot be altered in any way (read: no Photoshopping) from what was captured on camera. You’ll have to make me laugh without resorting to captions and other tomfoolery. I’m only allowing one entry per person; send them to samit.sarkar+contest @ gmail.com (yes, that’s a plus sign) with the subject line “Balls deep for Top Spin 3.”

The contest will officially end at 11:59 PM EDT on Friday, August 8, 2008 (that’s just under two and a half weeks before the US Open). Regrettably, this contest is only open to residents of the US of A. Get crackin’!