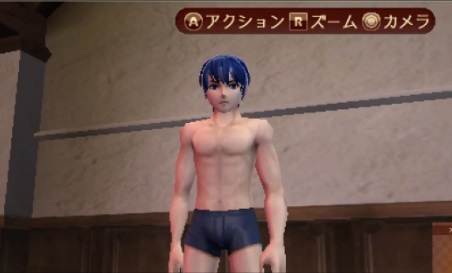 [Update 4: “Localization decisions for this game will be made when it comes to the U.S. in 2016. We have nothing to confirm at this time.” – Nintendo

[Update 3: Soleil does indeed fall for both male and female characters but due to the complexity of the Japanese language it isn’t conveyed very clearly in straight translations. The dialogue linked in update two below has Soleil saying “I like you too” which has been pointed out to mean like as in love, like a boyfriend or girlfriend would have. Thanks to reader Chad for pointing this out and clarifying for us.]

[Update 2: Other text has been translated and provided where Soleil accepts a marriage proposal from a male character, though throughout their conversations she still seems to be only interested in girls. Marriages have happened that don’t necessarily involve sexual attraction, and these dialogues don’t really show a build up to these relationships so they are open to interpretation.]

[Update: A few people have written in to try to clarify this story. Part of why Soleil is slipped the magic powder to see all men as women is so she will get used to being around cute girls without fainting. She still is attracted to the main character after the magic powder has worn off. This doesn’t change the fact she didn’t fall for them until she viewed them as female due to being drugged.

People have argued that Soleil is bisexual based on this text in the game, but in this scenario she is only interested in the other character when she believes they are female. At the end of the text, Soleil literally says she hates being hugged by that character after she accepts he isn’t female. At the very least there are multiple interpretations of this character.

If there is indeed other text in the game that states Soleil is bisexual, it still doesn’t change the fact her character seems more into women, as she faints around them. Making her fall for a man because she sees them as a woman is still problematic.

We’ve reached out to Nintendo for comment and will update the story when they respond.]

The Japanese version of Fire Emblem Fates has been available for a few days now, and translations of story and dialogue have been hitting the net, with one particular section doing the rounds today. Soleil is a character whose schtick is that she likes girls in a gay way and has trouble talking to cute girls without fainting. Go lesbians.

When playing as a male character with Soleil as a supporting character there is dialogue path in which the main character slips magic powder into Soleil’s drink when she isn’t looking. Upon ingesting the magic powder, Soleil sees all men as women, thus allowing her to fall in love with the male protagonist. The full dialogue can be seen here.

So, let’s look at what happens here: This is literally slipping someone a drug to alter her perception and convince her you’re someone that you’re not. That’s not consent. Not to mention this in many ways defends the idea of a “gay cure,” the idea that a character’s sexuality can be altered so that she falls in love with someone of the opposite gender.

Considering the previous Fire Emblem games have been censored heavily during localization I have a sneaking suspicion that this dialogue will be edited before the game reaches the west. I’m all for developers telling the stories they want to, but non consent and gay conversion therapy just seem gross and out of place here.

To repeat, I’m not demanding that this dialogue be cut, just highlighting that it feels weirdly out of context and underdeveloped in its execution.