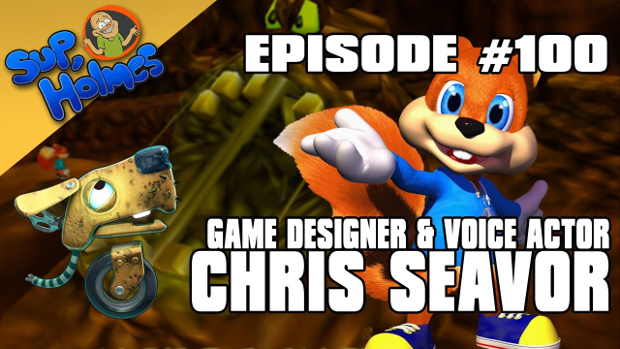 Some weeks ago on Sup Holmes, we welcomed Chris Seavor of Gory Detail to the program. Chris got his start in games working on the original Killer Instinct at Rare. From the sound of it, Rare was able to harness the best aspects of big-budget and independent development in those days. Back then, each team at Rare worked in their own “barn” and made the games they wanted to play. And no, “barn” isn’t slang for something else. They were really working in farmyard barns.

Other topics included Rare’s special relationship with Nintendo, the hot competition between the Banjo-Kazooie barn and the Conker barn, the surprising, lasting success of GoldenEye, the creative freedom that allowed for Conker’s Bad Fur Day to exist, the joy and pain (mostly pain) of voice acting, the company wide vote that contributed to Rare’s sale to Microsoft, the malaise that set in thereafter, Chris’ old plans for a Conker sequel, and a lot more. Chris even let a bit out about his highly secret new project The Unlikely Legend of Rusty Pup, currently planned for computers and Nintendo consoles. It’s one to watch.

Thanks again to Chris for appearing on the show! I certainly hope it won’t be the last time we hear from him. Speaking of which, updates regarding the future of Sup Holmes can be found on our Kickstarter page. The campaign still has a few hours to go and you can already get a few free games on there. Who knows what will happen once the campaign is actually complete?!?! (Hint: we’ll make more Sup Holmes and other stuff).