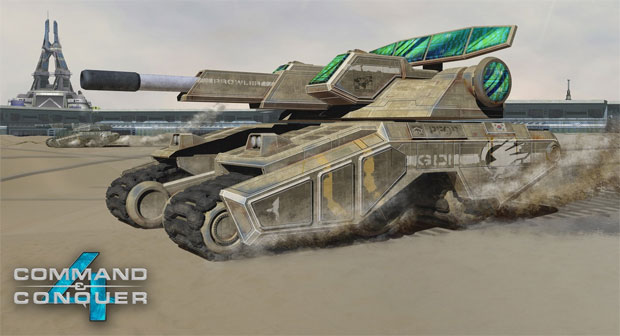 Ah, much better. This morning Electronic Arts announced Command & Conquer 4 again this morning, and this time, they’ve included a press release. As a survey suggested a few weeks ago, EA Los Angeles’ upcoming RTS with have a touch of MMO. The press release mentions “persistent player progression,” as a talking point along with a five versus five competitive multiplayer, and that new mobile base thing.

The game’s story will be the conclusion to Tiberium series. Nod’s Kane wants to get into the GDI’s headquarters and apparently leaves the Nod in order to do so. While that great drama unfolds, the two sides will continue to struggle, bit and cooperate with each other in order to stop the spread of Tiberium. Sounds thrilling, but seriously, a GDI version of Kane? Let’s not go there, EALA. Kane must always be an evil, bald man.

Below in the gallery is the first scrap of concept art for the game. The single image has a tank, a helicopter slash jetplane, and some big ass flying thing. It looks, if anything, very traditional C&C.

LOS ANGELES–(BUSINESS WIRE)–Behold disciples of Nod, the end is soon upon us. Electronic Arts Inc. (NASDAQ:ERTS) today announced that, after almost 15 years and 30 million games sold, EALA is bringing the award-winning Tiberium series to an epic conclusion with Command & Conquer™ 4. Shipping in 2010, Command & Conquer 4 will introduce a multitude of innovations to the to the classic fast and fluid Command & Conquer gameplay while retaining the core compulsions that fans have come to love over the series’ history. Introducing new class-based gameplay, mobile bases and persistent player progression throughout all game modes, Command & Conquer 4 offers players new, innovative and compelling strategic depth.

“Command & Conquer is a powerful franchise with an amazing 15-year legacy. We are thrilled to bring the dramatic Tiberium saga to a conclusion in Command & Conquer 4. This game is designed to give fans all the answers they’ve been looking for,” said Mike Glosecki, Lead Producer of Command & Conquer 4 at EA Los Angeles. “With its objective-based multiplayer mode, persistent player progression and all-in-one mobile base, players will experience Command & Conquer like never before.”

The story of Command & Conquer 4 takes place after the events of the critically acclaimed Command & Conquer 3: Tiberium Wars™. The year is 2062 and humanity is at the brink of extinction. With only six years left until the mysterious crystalline structure Tiberium renders the earth entirely uninhabitable, the two opposing factions – Global Defense Initiative (GDI) and the Brotherhood of Nod – inevitably find themselves in desperation for the same cause: to stop Tiberium from extinguishing mankind. The unthinkable becomes reality and Nod’s enigmatic leader Kane takes off for GDI headquarters. What is Kane planning in the heart of his enemies’ base? Command & Conquer 4 draws the epic conclusion to the beloved Tiberium universe, where fans will learn the fate of Earth, Nod, Tiberium, GDI and most importantly, Kane’s motivations behind his decade-long plan.

In addition to the two campaigns on the epic battles of GDI and Nod, which players will get to conquer alone or in a cooperative mode, Command & Conquer 4 will also feature a new 5v5 objective-based multiplayer mode, promoting teamwork and cooperation and delivering a social real-time-strategy experience never seen before in a Command & Conquer game.

Command & Conquer 4 is being developed at EA Los Angeles and will ship to retailers in 2010 for the PC. The game has not yet been rated by the ESRB or PEGI. For more information about the game, please visit www.commandandconquer.com or follow the community and development team on Twitter at https://twitter.com/ea_apoc. The July 24th episode of BattleCast™ PrimeTime will give fans the latest news and exclusive information on Command & Conquer 4. Additionally, Gametrailers TV will exclusively reveal the first cinematic trailer for Command & Conquer 4 in its July 23rd episode on SPIKE TV.

* According to NPD Group

Filed under... #Command and Conquer