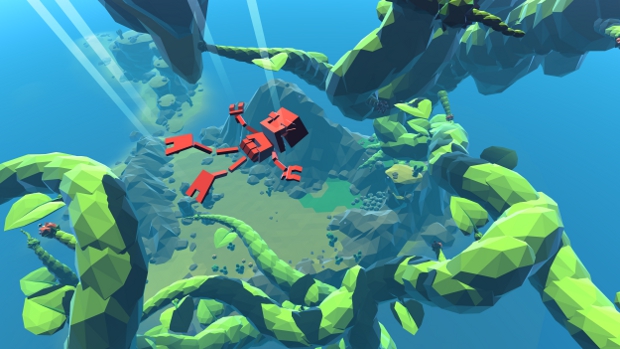 Ubisoft announced a new game today called Grow Home, and it looks freaking adorable! The game takes inspiration from wonderful works such as The Hitchhiker’s Guide to the Galaxy and Wall-E, and falls in line with the company’s recent tendency to pursue smaller passion projects such as Child of Light and Valiant Hearts. That sounds like exactly the kind of game I’d enjoy, and something I’d like to see more of from Ubi.

The project started as a new tool for exploring procedural animation, a “toy” for a small group of eight developers at Ubisoft Reflections, and grew into an idea for a game as the team started to experiment with it. The game stars a cute robot named BUD, a Botanical Utility Droid, tasked with searching for a new species of flora to bring more oxygen to his home world. He discovers the beanstalk-like Star Plant, and helps it grow while collecting its seeds.

Grow Home will have a heavy emphasis on exploration, as you climb the Star Plant’s many expanding branches to discover floating islands, hidden caves, and crystals scattered throughout, which can expand BUD’s abilities. I’m a huge sucker for exploration-based games, so I can’t wait to see more of this!

Grow Home will be available on PC via Steam on February 4, priced at $9.99.