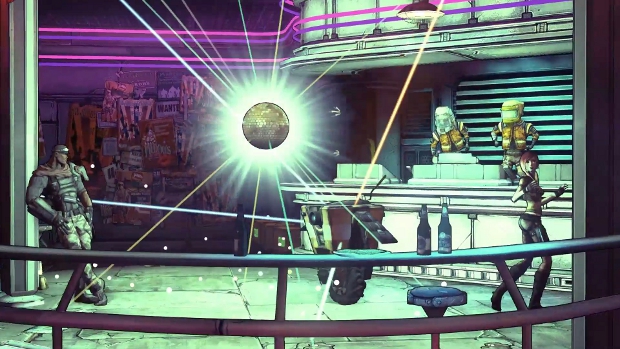 Who is that mysterious woman?

2K Games has been trickling out information about the playable characters in the upcoming Borderlands: The Pre-Sequel, but while it has featured Athena the Gladiator, Wilhelm the Enforcer, and Nisha the Lawbringer, the publisher has been pretty tight-lipped about the funny little robot who has been around since the beginning. Today, Claptrap gets the spotlight, and he uses it to dance, among other things.

Though one frame would suggest that Claptrap uses an advanced algorithm to assess the situation and produce the most appropriate response, previous comments from Gearbox seem to suggest that his action skill is selected randomly among a pool of possible abilities, running the gamut from really cool to apparently useless. The trailer above names a few: Torgue Fiesta, Funzerker, Laser Inferno, Shhhhhhhhhhh…trap, One Shot Wonder, and Rubber Ducky. Additionally, we see him with a pirate ship mast and four cannons, and also sporting some Siren wings. “Lunacy” just about describes it.

Another notable bit from the trailer is the informal introduction of an unknown woman. Though we have not ever seen her before, she is featured fairly prominently, shown to be running away from somebody or something. My guess? That is Handsome Jack’s wife, whose fate is hinted at in Borderlands 2, but never explicitly spelled out. We may just find out exactly what happened to her before the events of Borderlands 2.