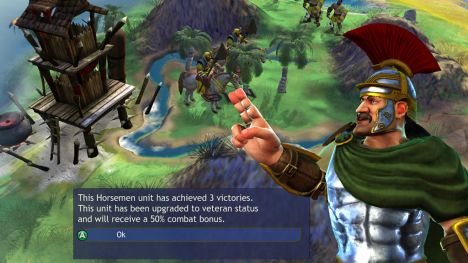 Been waiting with bated breath since Civilization IV: Beyond the Sword for a new taste of Sid Meier’s ridiculously acclaimed strategy series? Never fear, the newest title in the series is just around the corner with a release date of June 8th, but you can check out the demo starting tomorrow on XBLA and PSN if you live in North America.

What do you get to do in the demo? Here’s a summary:

As for the demo’s contents, players will be able to assume either Caesar’s laurel wreath as the head of Rome or Cleopatra’s crook and flail as Egypt’s pharaoh. Players can either play against the game’s computer-controlled opponents up to 1250 AD or head online to battle it out with human opponents over the same time period. The demo also comes packed with a tutorial for those unfamiliar with Civilization’s turn-based gameplay.

Not bad at all. Also, Civ fans should keep an eye trained on Destructoid in the next few weeks, as there just might be a contest with some extremely limited edition goodies coming your way soon. Stay tuned.

[Via Gamespot — Thanks, Charlie]