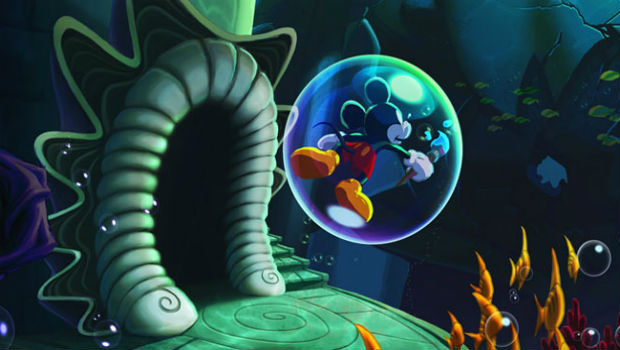 So far, we’ve seen quite a bit of Power of Illusion‘s varying Disney-themed worlds. We were privy to some hot Peter Pan screenshot action compliments of Jordan, and got a look at the castle from Chad’s preview. Then, our own Tony Ponce wrote up an awesome preview that heavily featured Power of Illusion‘s Aladdin world.

Now, it looks like Nintendo World Report has unearthed a brand new video for Epic Mickey: Power of Illusion, and it features the third and final world: Little Mermaid. As Tony said in his preview, the team was given access to the Disney Vault and original artwork for the films, so that explains why it looks so sexy. According to NWP, this will be the final world in the game before a showdown with Mizrabel.

The world itself, while beautiful, looks a bit too floaty for my tastes, but I’m sure the overall game will be amazing, and I can’t wait to play it: I’m looking forward to it much more than Epic Mickey 2.