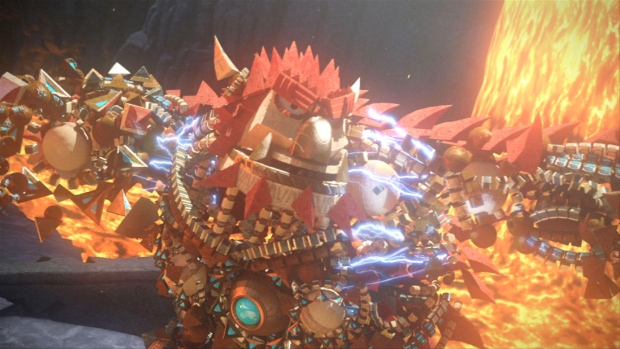 I’m the one who Knacks

This week I talked with PS4 system architect and Knack creative director Mark Cerny about his upcoming, family-friendly PS4 title. When talking about balancing the difficulty — making the game accessible as someone’s first console game on easy, engaging to a nostalgic core audience on higher difficulty — it became clear how Cerny and company did it. Platforming, which defines many of the mascot games we cut our teeth on, has taken a back seat.

“We’ve taken Crash Bandicoot and flipped it,” Cerny told Destructoid. “In terms of ratio between platforming and enemies. Crash was very, very heavy on the platforming to the point where — I went back and counted — [there would be] fifty plus jumps in a row, all of which resulted in death if you failed to make them, and then enemies that would be just obstacles. Many of those enemies had no attacks. You simply took damage by bumping into them.”

“We flipped it around to where we do have platforming, but it’s sort of taking a break from the combat,” Cerny explained. “The combat is about the enemies; their attacks and then the specific … places in their attacks where you can successfully defeat them.”

In aiming to be a more family-friendly title. it makes sense to avoid the pratfalls of platforming: potential frustrations because of the genre’s reliance on instant deaths after one bad move. I found Crash Bandicoot remained a challenge when I replayed it a couple years back. Still, it’s weird to talk about introductions to console gaming and not think of it by way of Super Mario Bros-style play. Check out my full hands-on preview of Knack very soon. Like, watch an episode of Adventure Time and if it’s not up yet, it will be after that.