AKA the best Star Fox 64 stage

While you tell us about your favorite patriotic game in honor of the United States’ Independence Day, I ask that you transport yourself twenty years into the past.

In July of 1996, Independence Day came to theaters with the intent of further proving that Will Smith could be more than a silly prince in neon clothes (Bad Boys wasn’t enough for most people). Roland Emmerich’s three-hit combo of slimy aliens, destruction, and patriotism won over Americans, and now we’re legally obligated to watch it while we re-enact colorful sky warfare above. It’s the 28th Amendment. Don’t look that up, just trust me on this one. 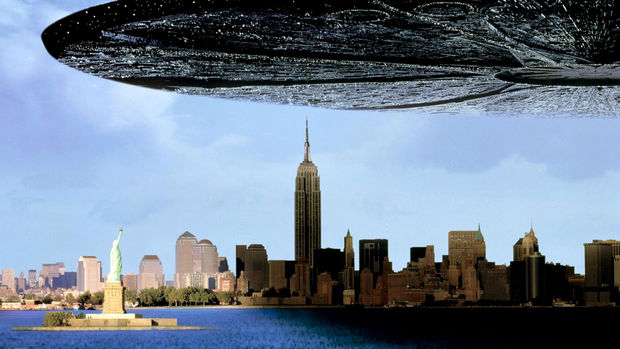 The final battle for the world (but mostly America) in Independence Day involves a gargantuan spacecraft with a charged beam that can destroy entire cities. After Jeff Goldblum hacks the shit out of some aliens in space, fighter pilots are able to launch missiles into the giant weakspots located on the bottom of the ships and end the onslaught. Oh, and Will Smith does some stuff, too.

In April of 1997, Star Fox 64 came out and too many barrel roll jokes happened. The game was pretty solid, but one level in particular was a bit suspicious. When Fox and crew fly to the planet Katina (to which my mind wants to add an r every damn time), they also have to fight a mothership with a “Core weapon…able to discharge enough energy to vaporize any city in the galaxy.” That bit of information is found on page 69 of the Official Nintendo Power Player’s Guide that I found in my closet, so you know it’s sexy and correct.

So Fox and friends (including Bill Grey, a bulldog with a real bad surfer accent) set out to destroy this ship, which Wikipedia tells me is called the Saucerer, while it prepares to blow up a military base that looks like a shitty pyramid. After destroying various hatches on the mothership, you can target the core weapon, not at all unlike Independence Day. Between that and the swarms of small fighter ships, it all feels like Nintendo might be run by Emmerich fans. Whether you call it a rip-off or an homage, it was a great level.

Plus, Bill being introduced on Katina and Bill Pullman playing a character in Independence Day can’t be a coincidence.

Happy Fourth of July to those celebrating!