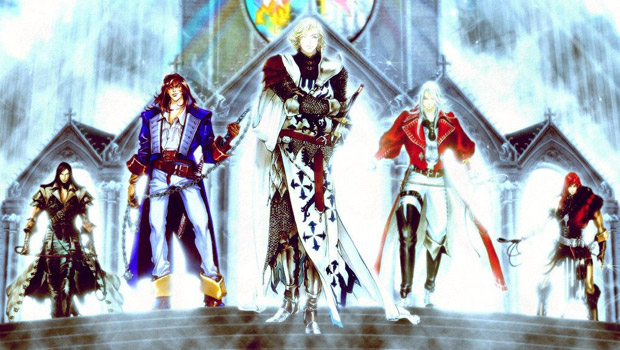 I promised more details about the upcoming Castlevania: Lords of Shadow – Mirror of Fate for 3DS, so here they are. Don’t ever say I never did nuthin’ nice for you jabronis.

Also from the Nintendo Power reveal, we learn that MercurySteam, the team behind the original Lords of Shadow, is the developer behind Mirror of Fate. Usually such handheld ventures are handed off to some other studio while the primary team dedicates itself to the home console versions, so this at least demonstrates confidence in the portable space. The game is primarily played from a 2D / 2.5D perspective, although every so often the environment will open up to allow for combat in 3D space. Still, the adventure is more exploration-based than its combat-focused predecessor, so it should offer a nice balance between the modern style and the beloved “Metroidvania” style.

The big news is the opportunity to play as four characters. Though I mentioned Trevor Belmont in my previous post, the subscriber-exclusive Nintendo Power cover I shared features Simon Belmont, Trevor’s descendant and OG Castlevania pimp. Apparently, the story of Mirror of Fate spans across the ages, placing you in the role of various heroes as they explore Dracula’s domain, each with exclusive abilities that will open up different areas of the castle. And though Trevor uses the Combat Cross and an array of magic spells, Simon rocks the trusty Vampire Killer whip and classic Castlevania staples like the axe and burning oil (read: holy water).

The remaining two characters have yet to be revealed, but I hope more Belmonts come along for the ride. Who else will we see? Christopher? Richter? The Lords of Shadow timeline is separate from the main Castlevania history, so we need not worry about introducing plot holes and time paradoxes!