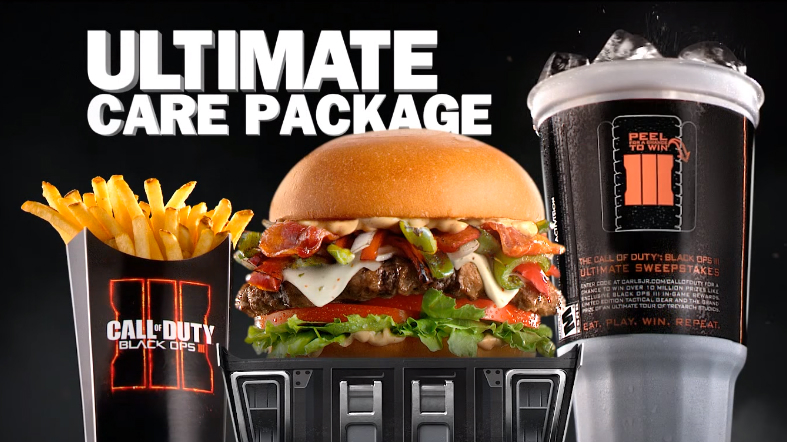 You know, for the veterans

The United States of America, right? Where our burgers are big and our guns are bigger. And our heart failures are spectacular. Or something. Let’s start over.

Carl’s Jr. (also known as Hardee’s) is teaming up with Activision in a very “U-S-A! U-S-A!” cross promotion. The basic gist: buy a burger in a Call of Duty-themed package, get a chance to win an in-game cosmetic item for Black Ops III that makes it look like you spilled ketchup, mustard, and pickles on your weapon. It’s for those who like guns and burgers so much they want their guns to be burgers (but not vice versa, probably).

To be honest, I’m surprised Carl’s Jr. is advertising the Tex Mex Bacon Thickburger for this promotion and not the Most American Thickburger. Perhaps that would be too on-the-nose?

In all fairness, some good can come out of this media marriage. Proceeds from sales of the Ultimate Care Package on Veteran’s Day will go toward the Call of Duty Endowment, a non-profit organization that works to place military veterans in high-quality jobs. So hey, if you want an excuse to eat this burger, do it next Wednesday and some of your money will go toward charity.