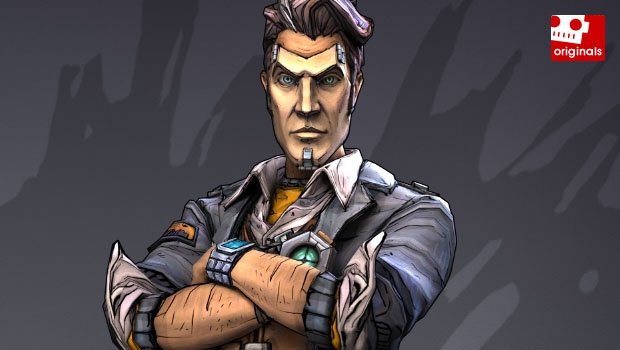 When talking about Handsome Jack, the nefarious antagonist of Gearbox’s highly anticipated Borderlands 2, one word invariably comes to mind: “douche.” It’s not just because Jack is the biggest douche that Pandora has ever had the misfortune of meeting, but it’s also because that’s how lead writer Anthony Burch describes himself every time he talks about his creation.

Handsome Jack is going to be your opponent, and Gearbox’s creative minds want you to hate him. They also want you to love him, so the studio has drawn inspiration from a few of the most iconic adversaries in videogame history, with the aim of building somebody you love to hate and hate to love.

In other words, they want to make a real douche.

I had the pleasure of chatting with Burch, lead designer Paul Hellquist, and lead artist Jeramy Cooke in the hopes of finding out as much as I could about Borderlands 2. My biggest question concerned Handsome Jack, as I was eager to know whether the focus on a central villain was intended to address the lack of player motivation in the original Borderlands. The enemies of Gearbox’s first outing were fairly nondescript, and there wasn’t much incentive to murder them. Anthony was aware of this, and made it a goal to give players a real target.

“When I played the [Borderlands] DLCs, ‘The Secret Armory of General Knoxx‘ was probably the strongest, and possibly the strongest of all of Borderlands‘ stories in general, because it’s got this really strong central villain, this General Knoxx,” Burch told me. “We’re huge fans of BioShock; we really like Portal [and] System Shock; and all the games we tended to like were those that had very strong villains, like Shodan or Andrew Ryan or GLaDOS.”

In that vein, Borderlands 2 has shifted its story away from one with a vague goal in which you’re hunting for a nondescript vault, in order to accommodate a living, breathing, snarking objective.

“This story will still have you searching for a vault and all that stuff,” continued Burch, “but we wanted to make it feel different and have an omnipresent force that could be heckling you, reminding you that ‘I’m the point of the game and you want to kill me.’ I feel like a douchebag for even mentioning Handsome Jack in the same breath as GLaDOS or Shodan, but that was where the motivation was coming from. Someone who can talk to you and make you hate them due to the sheer douche-itude of their dialog.”

There are villains we love and others we truly despise. With Handsome Jack, Anthony wanted a character who lies in the middle. A character who is hard to outright hate but nonetheless deserves everything he has coming to him. Gearbox’s lead writer throws his own douche-itude to the wind in explaining his inspiration for achieving this balance.

“Every time I talk about the inspiration for Handsome Jack, it’s going to sound like me saying, ‘This is going to be the greatest creation of all time,’ but it’s just me sounding like a douchebag. But you know the way you feel about The Joker in The Dark Knight, where every time he shows up, something amusing is going to happen — or at least something mildly unexpected — but at the end of the day, you still want Batman to take him down.

“The hope is that when Handsome Jack speaks, you’re sort of drawn to him in a certain way, because at its heart, Borderlands is still supposed to be a game that doesn’t take itself too seriously, so he has this humor attached to him. The idea was to go between ‘ha ha, this dude is funny and he’s saying really douchey things,’ and him beginning to cross lines that make you want to take him out. That’s the hope, anyway — if I can be even more arrogant and say he’s GLaDOS times Joker.”

That last comment was too arrogant even for Cooke, who simply responded with, “Wow.” Speaking of Cooke, his visual design for Jack also took a lot of consideration. Cooke wanted to design a character who was both funny and enraging.

“That’s how we found the look for him, too. It’s like, he’s kind of likable but he’s also a douchebag,” said Cooke.

“Yeah, he was a really interesting character to design,” Burch added. “One of the earliest ideas we had was that he should look like the hero of somebody else’s game. If this was a game from any other corporation, he’d be the protagonist of it. We found a way to do that without people thinking, ‘Hey, he’s a good-looking guy,’ which is where the mask came into play.”

The mask to which Burch refers can be seen in the character art for Jack, where it looks quite clearly like he’s wearing a human face over his own. It’s a very handsome face, until you realize it isn’t his. It reminds me somewhat of Pavi Largo from Repo! The Genetic Opera, but methinks we’ve had enough character comparisons. I certainly don’t want to cross into the same douche territory as Anthony Burch, after all.

Keep reading Destructoid! We’ll have more insight into Borderlands 2‘s design in the near future.