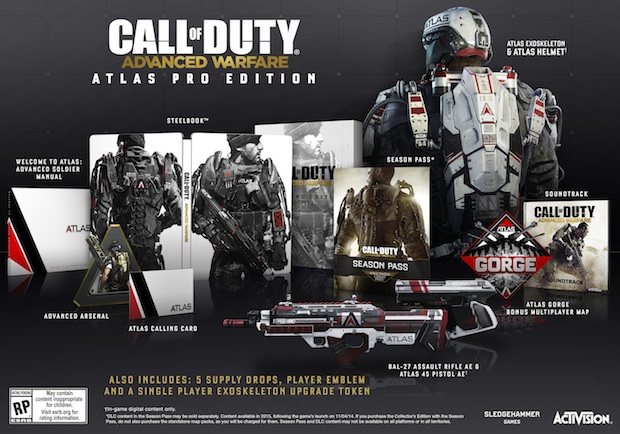 The $120 version includes a season pass

A brand new trailer for Call of Duty: Advanced Warfare has dropped today, detailing how the conflict leads the way for the Atlas PMC to come into power. It’s your typical Call of Duty trailer, with tons of cool looking set pieces and explosions all shown off. The trailer ends with a quick but very interesting tease of what we can expect out of multiplayer as players are equipped with exoskeleton suits now.

Activision also announced all of the over bloated editions of the game you can get your hands on. First there’s the Atlas Limited Edition for $79.99. This will include one bonus map which re-envisions Call of Duty 4: Modern Warfare’s Pipeline map, plus a Bal-27 AE Assault Rifle, Atlas 45 AE Pistol, themed Atlas exoskeleton suit, helmet, and player card. There’s also going to be five bonus supply drops, and a single-player exoskeleton upgrade token. Lastly this will include a steelbook, manual, and soundtrack.

The Atlas Pro Edition is the high-end bundle at $119.99, which includes everything I mentioned in the Limited Edition plus the season pass that includes four DLC map packs. Alternatively there’s the Digital Pro Edition for $99.99 which is the same exact content minus any of the physical goods from the Atlas Pro Edition.