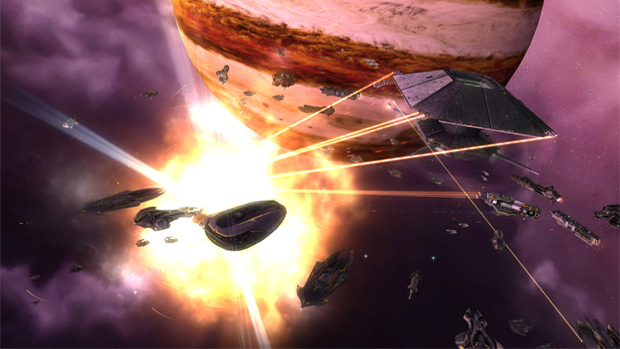 Following his elaboration on why he sold Impulse to GameStop in a recent interview, Stardock’s Brad Wardell slowly moved away from the business mindset of representing a company involved in a major industry deal, and slowly opened up about how Stardock’s renewed freedom will affect its games as well as providing insights into his vision for the future of gaming.

Now that Stardock has the chance to once again focus on what its core businesses traditionally were (desktop software and games), it also allows its employees to actually lead normal lives again. Wardell explains:

“Case in point, Elemental: War of Magic that we released last year. It got terrible reviews and if you look at our Metacritic scores, anything under 90 was considered a failure for Stardock. But then War of Magic came out, why did that happen?

“Well part is because I was working over a 100 hours a week all summer [of 2010]. I was doing two all-nighters a week because part of my day was working on Impulse and part of my day was spent working on the software side. And then we had multiple game projects, and like I said multiple software projects, and I wasn’t the only one starting to work crazy hours.

“I mean we were spread very thin because we wanted to do it all. But at some point you either have to break down and build up a much larger company, so that you’re not spreading yourself thin. Or you have to make some tough decisions and say: ‘Well, I think we’d rather not become a gigantic company but instead we’ll find some good parent for our baby here, our Impulse baby, to take it to the next step so that we could focus on making cool new stuff.'”

Cool new stuff like more Sins of a Solar Empire or Galactic Civilizations? I asked Wardell about the future of Stardock’s franchises because besides Elemental: War of Magic, which is set to receive the Fallen Enchantress expansion/redesign this year (free for Elemental owners who bought the game before 2011, and discounted for other owners, to make up for the game’s state at launch), Sins is getting the new Rebellion expansion as well.

“Yeah and now I finally get to spend some time on it! Case in point, I barely got to spend any time on [Sins of a Solar Empire:] Trinity. I don’t want to steal any thunder early, but yeah we have some really cool stuff that’s been in our lab that our guys had been wanting to do stuff on. And now obviously we have, you know, an abundance of capital that we can invest in all kinds of other things that we just wouldn’t have been able to before.”

I asked if that included a Galactic Civilizations III, but he couldn’t talk about that. Drat.

Stardock’s focus has been on OS/2 on PC over the years, the latter of which Wardell likes because “it’s open and I’m free to make whatever I want,” it doesn’t necessarily mean the company will always develop for the PC alone.

At GDC ’11, Stardock’s Jon Shafer — former lead designer of Civilization V at Firaxis — was part of a panel of strategy game luminaries that fired back against comments by Cliff Blezinsky, who said that “middle-class” games are dead. Because there are a ton of strategy games that can be considered “middle-class” between big AAA blockbusters and small indie games. And with handhelds, tablets and mobile devices becoming increasingly complex and viable gaming devices, there could be market for 4X games outside of its traditional PC home. I mean, who wouldn’t want to play Sins or GalCivII on a tablet? 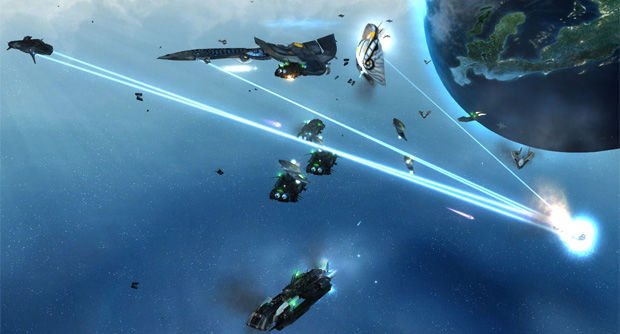 Even though Wardell uses both PCs and Apple products for coding and personal use, and Stardock has “other people here doing some very interesting things with Xcode and looking at Android and all kinds of other things,” I didn’t get the impression that we’re getting a Stardock 4X strategy game on XBLA or PSN just quite yet, but the developments in the past years did impress Wardell.

“This is the greatest time in gaming since I’ve been into games. I mean think about the past, let’s say, 18 months. If you’d look at the releases of interesting things, it’s so cool! We now have social gaming, the handheld games are now far beyond making the old Pac Man or old classic arcade games — you know yet another iteration — but [there are] truly innovative games on all these platforms.

“I mean look at Minecraft, right? Would Minecraft have been possible 5 years ago? This is the greatest time in gaming history, and we get to be part of it. And […] the problem is I have a hard time sleeping because I don’t want to miss anything!

“I mean, there’s just so much cool stuff coming. And heck look at what else is coming. We have WebOS in the pipeline, who knows what that is going to bring into play, and […] I get tingly just thinking about it. Can you imagine if we were stuck in our prime when the console market was dead? I remember the old days where, you know, [if] you wanted sound you had to use Adlib or Soundblaster and […] our options were so [limited].

“And if you made a game, your only hope was getting picked up by a publisher and being in a box. And now we’ve got Xbox Live Arcade and there’s the PlayStation thing and Wii is doing stuff and, you know, there’s so many different options.” 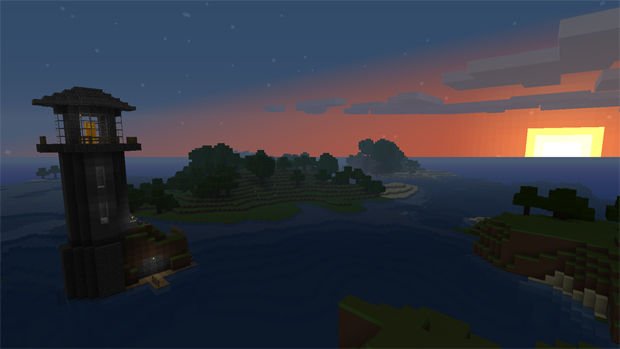 After talking about different games and genres for a bit, it became clear that while Wardell loves the new opportunities that new technology has brought in terms of gaming devices and digital distribution platforms, he is still a tech guy at heart. Nothing made this more clear than what he had to say about the future of 64-bit graphics.

“If you think it’s cool now, right now games are about to make this jump to 64-bit. And most gamers [who are not] programmers don’t realize the significance of that. Because we’re gonna go from messing around with these 2GB limits to having essentially unlimited memory, and people don’t realize what that means.

“But it means we’re gonna have these crazy high resolution textures. That’s what’s holding us back, that’s why graphics haven’t got that much better in the last few years. It’s because [with regard to] the texture memory [it] doesn’t matter how much is on your videocard, we only have two gigs to play with. Give them another year or two and we’re going to see some really crazy stuff.”

Does he think console makers will jump on this development?

“I’ll tell you, the next generation console had better be 64-bit. […] I’ll put it another way, if they don’t make it 64-bit, then what will happen is that the PC games will get so far ahead of console games visually that they’ll be in for some real hurt.

“I mean, even today the video cards are capable of creating essentially photorealistic real-time 3D, but they can’t realistically do it because of the memory. And that’s why you end up with these interesting art styles that are a little cartoony. It is because the memory on the 2GB limit on [32-bit] Windows is holding them back. But two years from now when everyone is running 64-bit Windows 7 or what have you, that’s not gonna be a problem.” 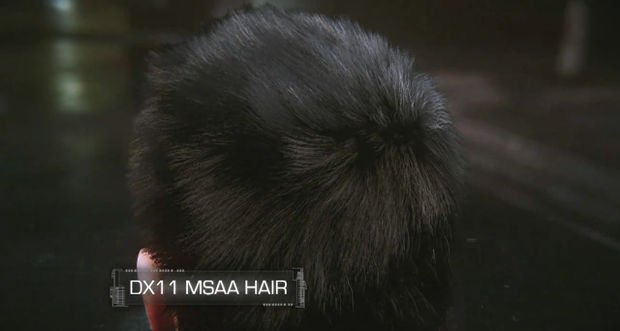 I asked him if he had seen the new Unreal Engine features demonstration, to which he said: “Yeah but you can bet your butt that was running 64-bit.” So the future (outside of new devices) really is 64-bit?

“Yeah, that’s why I can’t imagine consoles not [becoming] 64-bit. Because the graphical difference between the two, and again not because 64-bit is faster or anything like that, it’s just a memory addressing thing and that’s it. I don’t want anyone thinking that there’s some magic about it other than that you can have very very very large textures being juggled in pure RAM all the time.

“Until we get to 64-bit where the memory for these video cards will get to show their stuff, we’re kind of at a standstill.”

It’s been 11 years for me since I did exams in memory addressing, so I’m not even going to try commenting on the future of 64-bit graphics with regard to current-day video card memory handling. But the move to 64-bit OSs has been a slow one (anyone remember Windows XP 64-bit?) in terms of consumer adaptation towards having that as a standard. Regardless, it sounds like 64-bit graphics technology is something we should keep a closer eye on in the future.

It will be interesting to see where the next Xbox or PlayStation will go with that. Especially now that the Wii has shown the profitability of a low-tech console with mass appeal, and Microsoft and Sony have since both released their own motion controllers, the two rival companies will eventually have to decide on the future of their console platforms (if they haven’t done so already).

Will they focus on high-tech features to keep competing with the PC as a gaming platform? Will they settle for the bare minimum that supports the new Unreal Engine for the graphical jump from current generation hardware, so they can say “Hey look at how great this looks, go buy it!”? Or will they incorporate both so we can have a $700 motion controlled Kinectimal or EyePet with photo-realistic DirectX 11 fur shaders?

Whatever the future of gaming graphics and technology brings to those platforms, please give us Galactic Civilizations III and Sins of a Solar Empire 2 first, Stardock. It’s not like you have to worry as much about Impulse anymore.