Use a code card to pick up someone else’s trash!

[Header image by SittingOvationArt on Etsy]

No, it’s not a Fallout crossover. In Pokémon Sun and Moon, Bottle Caps are used in Hyper Training to raise one of your creature’s statistics to the maximum potential value. They’re especially useful for people who want to use their Pokémon competitively, or take on some of the harder post-game content. They’re exceedingly rare, so any opportunity to pick one up is welcome.

Starting today, code cards that grant a silver Bottle Cap are being distributed in physical game stores worldwide. In the U.S., Germany, Denmark, Norway, Finland, Ireland, and Italy you can pick one up at GameStop stores, in Canada you’ll need to visit an EB Games. The codes are available at GAME stores in Spain and the U.K. French Pokémon trainers will need to visit a Micromania store, and Mexican players can get codes from GamePlanet. Finally, in Belgium and the Netherlands, the codes are available at Game Mania. Some countries had started their distributions before today, but codes should work in all territories at the time of this writing. 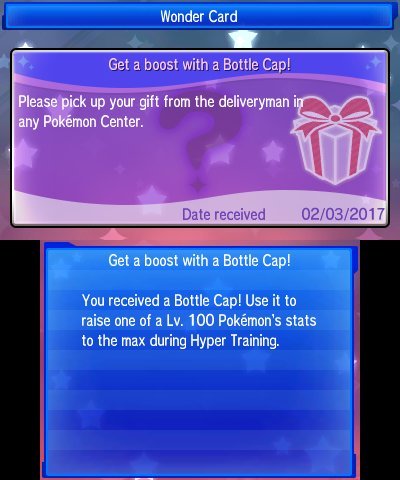 To use the Bottle Cap, head to the shopping mall at Hau’oli City and speak with Mr. Hyper. The creature you want to train has to be at level 100. The codes only work once per game, but don’t expire until May 13. You should have a few weeks to go to your local game store and pick one up. The U.K. distribution is ending soonest on February 28, but most other regions will have codes available until at least March 5.