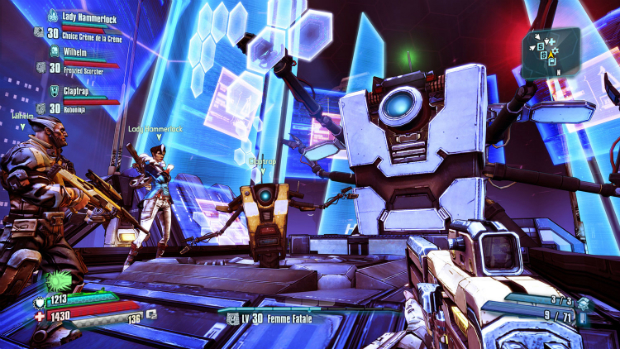 Inside the mind of Claptrap

During today’s Inside Gearbox panel at PAX East, Gearbox unveiled the trailer for the fourth piece of Borderlands: The Pre-Sequel downloadable content.

The story content picks up after the end of The Pre-Sequel and leads into the beginning of Borderlands 2 where the player meets Claptrap in the tundra of Pandora. Jack learns that his recently murdered boss Tassiter had valuable software hidden away inside Claptrap’s mind, so he digitizes the Vault Hunters to go retrieve it.

Gearbox debuted the trailer for PAX East attendees, featuring giant Handsome Jack heads, confetti, and glitched weaponry. The content is described as lasting “several hours,” and will release on March 24, the same day as Borderlands: The Handsome Collection.