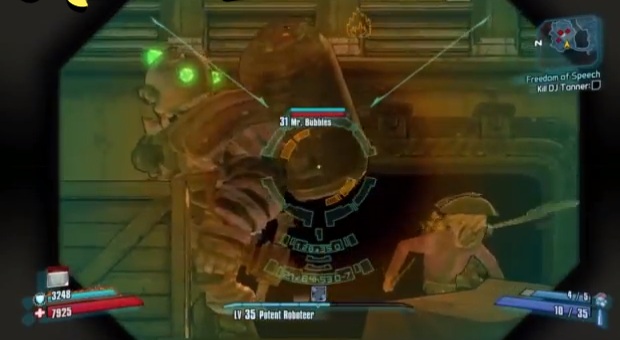 Minor spoilers below, you’ve been warned

Borderlands 2‘s first DLC, Captain Scarlett and Her Pirate’s Booty, extends the original game’s love for having as many Easter eggs as possible. The latest (I’d argue greatest), discovery is that there is a Big Daddy named Mr. Bubbles.

If you’re somehow not in the know, this is of course a reference to what the Little Sisters call the Big Daddies in BioShock. Yes, there are some people who don’t know this. Speaking of Little Sisters, Mr. Bubbles has a a friend with him named “Lil’ Sis” that you can kill or converse with to receive a special weapon.

Even more interesting is that these Big Daddies apparently appear all over the place, with the uploader of this video saying that he’s “seen them spawn in three areas.” I wonder what they’d do if you just followed them around and didn’t kill them? Like, what exactly is their goal/reason for being there? There probably is none, but it’s still awesome either way.

This Might Be My Favorite Borderlands 2 Easter Egg Yet, Courtesy Of The New DLC [Kotaku]