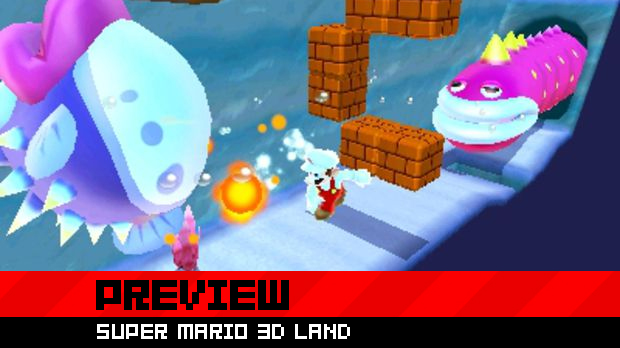 In the past week, I’ve played an inordinate amount of old school, side scrolling Mario games, so the transition into 3D — again — was a bit jarring for me. Once I gained my bearings in the face of this extra dimension, I gave Super Mario 3D Land a go for the first time.

My time with the game was brief, consisting of two worlds of play, but I can offer some details on a new suit, a Legend of Zelda-inspired world and a bunch of colorful screens. Interested? 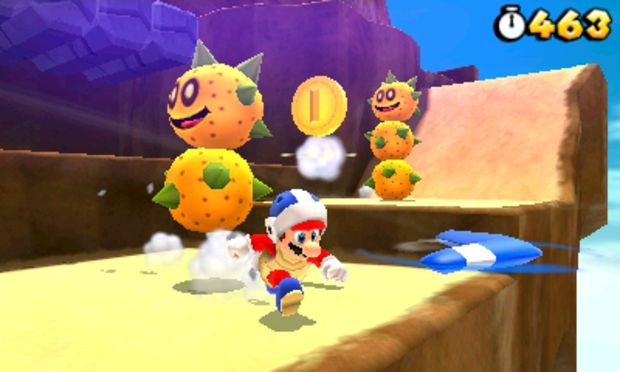 Our most recent Super Mario 3D Land preview went in-depth covering the game, so, given the brevity of my hands-on time, I’m here to deliver some quick hits.

In the world I started in, I found Mario clad in a blue Koopa shell and a helmet, the trappings of Mario’s boomerang suit. The boomerang, as a projectile, is essentially a slower and wider fireball with less range. It was cool and I’ll always take the security blanket of a power up, but I had much more fun when I came across a fireflower, or just jumped on enemies’ giant heads. Plus, the helmet looks a bit goofy on Mario, making him look much less adorable than he did in New Super Mario Bros.’s blue shell. Speaking of adorable, the tiny, sans-power ups Mario, who is faster and a more adept jumper than chunky Mario, is also adorable.

Along with the new, of course, there was a healthy mix of old, and some elements, like red coins, that hark back to past Mario titles. I came across a neat button in the first level that just screamed to be pressed. Doing so produced a string of music notes that played the Super Mario Bros. theme song when collected in fluid succession. As mentioned in our previous preview, Tanooki leaves have run amok in Super Mario 3D Land and every enemy seems to have a plush, fluffy Tanooki tail stuck to their bum, which is absolutely adorable. 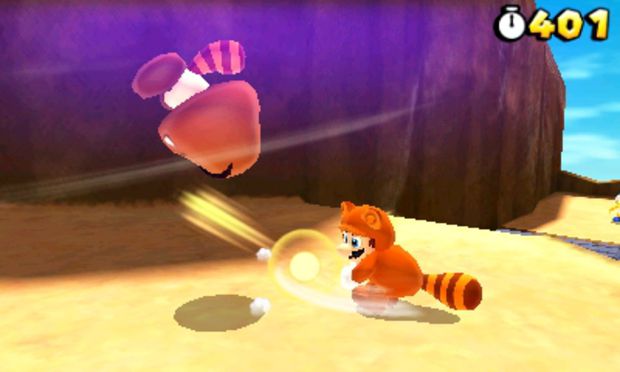 The second world I played was a throwback, but this time to Nintendo’s other flagship title, The Legend of Zelda. I was a bit confused when I was told that the world would be Legend of Zelda inspired, but it all made sense upon arrival. Surprisingly, the camera shifts to a more top down perspective and the world was sectioned off into rooms similar to those you might find in an original Legend of Zelda dungeon. It was a novel mash up and such levels could prove an interesting change of pace if there are more of them — I’m already pining for some 2D, throwback levels.

While I was impressed with most elements of the game, including the diversified enemy types I came across in my brief hands-on time, I was a bit surprised at how short the two levels I played were. Perhaps there is cause to go back and discover all the little secrets the levels hold, especially in the rooms I left unexplored in the Zelda-inspired level, but the brevity of the levels left them feeling unfamiliarly bite-sized.

The gameplay, aesthetic, and sound in Super Mario 3D Land are resolutely Mario. The game looks gorgeous and crisp and the tracks bring back all sorts of fond memories, though something did strike me as off with respect to Mario’s voice. Nostalgia is bound to make longtime fans giddy while the fanciful, vibrant world is poised to enrapture legions of new fans. What these two camps are sure to bond over, aside from having a rare piece of compelling 3DS software, is the expertly crafted gameplay we’ve come to expect from the franchise. That and the adorableness that is the Tanooki tail.