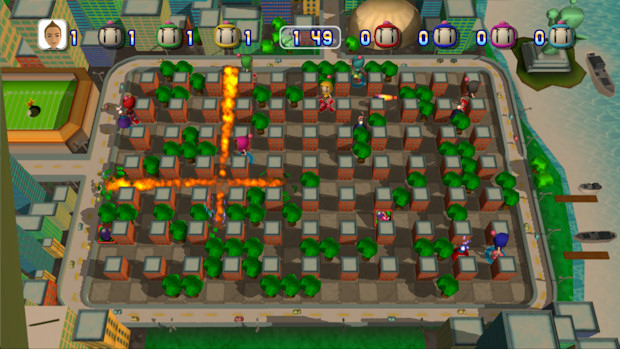 Bomberman Live (that awesome game with Mr. Destructoid in it) is getting a sequel! It’s been a few years since the original game first appeared on Xbox Live Arcade, but Hudson has recently announced that Bomberman Live: Battlefest will be hitting XBLA, PSN and WiiWare very soon.

Battlefest brings a whole new batch of modes to the game, including VIP, Capture the Flag, Capture the Crown and Bankroll. A new batch of Powerups such as Cluster Bombs and Lazer Bombs will be in attendance, joined by a eighteen new characters that join the original cast. The XBLA version will also feature Avatar support … and I know you all just crapped on your own balls with excitement over that.

Bomberman Live: Battlefest will hit XBLA in Winter of this year, with the PSN and WiiWare versions following sometime in 2010. Yeah, delays suck, but what do you expect? It’s not called Bomberman Ware.

Ready for more? The sequel to the immensely popular downloadable game brings more action, more multiplayer fun, more powerups, more modes, more maps, more costumes, more….everything! The classic Bomberman gameplay upgrades with new features (including the fan-requested Teams gameplay!) that will have you hooked on blasting friends online or locally. And with up to 8 players online, every match is guaranteed to be epic fun! With an array of gameplay options at your disposal, Bomberman Live: Battlefest is set to rock the house on Xbox LIVE® Arcade this Winter, and detonate on the Playstation®Network and WiiWare™ in 2010!

Assemble the crew. It’s time to bring the bombs with your buddies and prove who’s got the chops to hold the Team crown! Play locally or bring the pain online; it’s more fun with friends!

All new ways to claim your Bomberman crown! Learn more about these team-only gameplay modes and how they’ll change the way you play.

VIP
Protect the VIP! Two teams of four each have one VIP on their squad. Unfortunately, the VIP is so important, they can’t set any bombs! You’ll have to work together to defend with your other team mates who must escort the VIP to a designated point at the other end of the arena.

Capture the Flag
The classic multiplayer game is here in full form! Both teams have a flag so both teams will need to both attack and defend their flags as well. Coordinate effectively as a team to come out on top! It’s CTF, Bomberman style!

Capture the Crown
First appearing in Bomberman Blast, Capture the Crown makes a triumphant return! Players start on the edges of the arena with one crown in the middle. The player who is able to hold onto the crown the longest wins!

5 all-new powerups make their debut! Will the power of the Cluster Bomb be your new go-to? Or will the destructive Laser Bomb be a game-changer? Veterans need not worry as all the classic powerups return in full force! Customization options allow you to pick and choose which power-ups appear in any given arena.

You thought you had choices before? Bomberman 2 packs 18 new costumes in addition to the original selection from Bomberman Live! Mix and match 3 costume pieces from Napoleon Bombaparte, Chef Bombardee, Sir Bombalot, and more! Make your Bomberman your own!

The Bomberman battlegrounds have changed once again, this time with more tricks, gimmicks, and fun! From Adventure Island themed landscapes to the shape-shifting MultiMaze, no battle will ever be the same!

Bring your avatar on to the battlefield with the XBLA version! Your avatar is no longer stuck on the menus, and can now run, throw, and bomb with all combatants on the map!