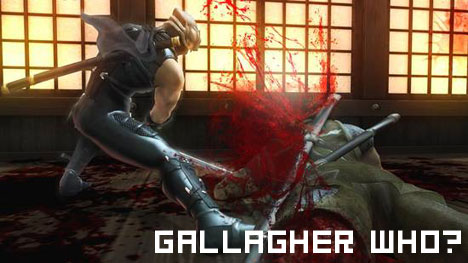 That’s my impression of Ninja Gaiden II, Team Ninja’s true follow-up to their 2004 Xbox title. You’ll see exactly what I mean in a few weeks when the game finally ships to stores — Microsoft and Team Ninja have announced that the title has gone gold! SPLAT!

In order to promote the big event, GamePlay HD will air a documentary on the history of the ninja, “The Way of the Warrior: Ninja Gaiden II.” The documentary will be available on Cablevision IO Digital on May 30, and will hit Xbox LIVE Marketplace on June 10.

Ninja Gaiden II ships to stores on June 3, so the wait for splish-splashing blood-splattering ninja action is almost over. Be sure to check back early next week, when we’ll have our full review of lil’ Ryu Hyabusa’s violent new next-gen adventure.

The Time for Vengeance Is Near; “Ninja Gaiden II” Has Gone Gold

Microsoft and TECMO/Team NINJA announced today that “Ninja Gaiden II,” the blockbuster action-packed sequel to “Ninja Gaiden,” has gone gold and will be shipping to retailers throughout North America on June 3. “Ninja Gaiden II” features a new and improved game engine, developed from the ground up exclusively for Xbox 360, by legendary video game developer Tomonobu Itagaki and Team NINJA.

In “Ninja Gaiden II,” gamers must guide Ryu Hayabusa on a mission to avenge his clan and prevent the destruction of the human race. Armed with an assortment of ninja weaponry, players must help Ryu skillfully maneuver through a world fraught with peril. “Ninja Gaiden II” will feature a new auto-health regeneration system, levels, adventures, enemies and thrilling combat, representing a true evolution of the highly popular franchise.

To get a head start on the fun ninja action, check out exclusive Ask A Ninja episodes on Xbox LIVE Marketplace. Sponsored by “Ninja Gaiden II,” the series will help gamers get in touch with their inner ninja and features seven hilarious video clips. The first three exclusive episodes have already aired and more episodes will air May 27, June 3 and June 10. Xbox LIVE Gold members can view the episodes the first week of release and access to the entire Xbox LIVE community will be available the following week.

Additionally, GamePlay HD will air “The Way of the Warrior: Ninja Gaiden II,” a documentary focusing on the history of the ninja and how it impacted the game. Be the first to see the hour-long episode premiering on the Cablevision IO Digital May 30. Xbox LIVE members will also be able to watch the documentary for free on Marketplace starting June 10. “The Way of the Warrior: Ninja Gaiden II” will bring you face to face with the members of Team Ninja, historical areas of Japan, real life ninjas and exclusive looks at behind-the-scenes footage.

“Ninja Gaiden II” will have an estimated retail price of $59.99 and is rated “M” for Mature.  For more information, visit www.xbox.com/ng2.