Still free-to-play, but with a restructured monetization system

[Note: The images used in this article are from the PC version of Retribution.]

Developer Zombie Studios has announced that its free-to-play first-person shooter, Blacklight: Retribution, will be coming to the PlayStation 4 as the first Pub Fund game for the console. The studio released the PC version last year, and after regaining the console rights back for its shooter, it’ll be doing all sorts of things to bring the title to Sony’s new console.

I got to speak with Jared Gerritzen, studio head and creative director at Zombie Studios, shortly before today’s announcement and he detailed how the team is retooling all the tech for the console, some of the ideas they have for using the new PlayStation 4 controller’s touch screen, and just how scary it is to self-publish a game.

Once Jared got the rights back for Blacklight, he spent some time shopping the title around to other publishers to bring it on consoles. After not finding anything desirable, Jared decided take matters into his own hands.

“So I went back to Zombie and said ‘Let’s just publish it all ourselves,'” Jared told me. “So we’re going to be developing and publishing Blacklight on the PlayStation 4 all ourselves. Literally no safety net, it’s really freaking crazy. That’s kind of why with Daylight we’ve been doing a lot of things to figure out how to actually do our own marketing and PR with everything. It’s going to be pretty interesting going from Daylight straight to Blacklight.

“The really exciting thing is us publishing it, we have full control over it. Scarier existence, you know? [Before] we could say ‘Oh, that wasn’t us! That was those guys!’ But now, we’re going to be the holders of all things, which kind of sucks. That’s the thing, back in the day ‘Oh, wasn’t me! Not me, not my fault.’ But now it’s like ‘Shit. Yeah, okay, we’ll get on that. Sorry. Okay, we’ll fix that. Sorry.’ That’s the thing about developers that are willing to say sorry, versus developers that just don’t even acknowledge it.”

The content and the gameplay of Blacklight will be the same as the PC version, but Jared tells me that the experience will still be different. Plus, they have the freedom to do whatever they want to the game now.

“The big thing that we’re doing is the experience is going to be completely different. Not only the experience but the game just inherently changes when it goes from the PC market place and PC user base versus console.

Jared told me they’ll be revealing more stuff as we get closer to E3, but some things he was able to share was that they’re going to be putting a big focus on the eSports scene with a spectating system similar to a sports program, making use of the uStream service, and working with outside partners to get actual prizes for players. They’re pushing for more maps and other content as well. 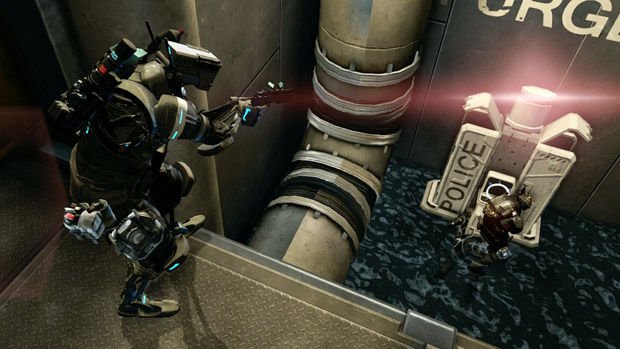 I also asked Jared if they have any plans to use the PlayStation Move. “Only if it makes sense,” he told me.

“That’s the coolest part, we’re not afraid to throw away work, and our guys work so quickly. HRV for Blacklight, when I told them ‘Hey we’re going to make it so you press a button and you can see through walls,’ half my devs were like ‘You’re a fucking idiot. Why are you doing that!’ It was like ‘Well let’s try it, let’s just prototype it out.’ We did it, we kept it in for a week, and then after we took it out, everyone was like ‘I really like it. Let’s put it back in.’

For now, they’re focusing on getting the thumbsticks and the general controls perfect for the console gamers. Plus, they want to focus on making use of the new PS4 controller’s touch screen in interesting ways.

“With Blacklight, the cool thing was we tried doing some interesting things like the mini-games, you’d come up to something and you’d have to do a mini-game. That’s the first thing we thought of when it comes to the touch screen. Instead of just holding E, maybe you’ll have to be like ‘Oh shit, I need to do this thing.’

“‘Cause that gives that frantic nature. Those are the first things that we’ve thought of for touch screen, but we’ll probably make it so that it will be a major part of the customization system, or instead of having to always use the thumb sticks to rotate. We need to get it really working and see what looks right and also the fidelity of the screen. 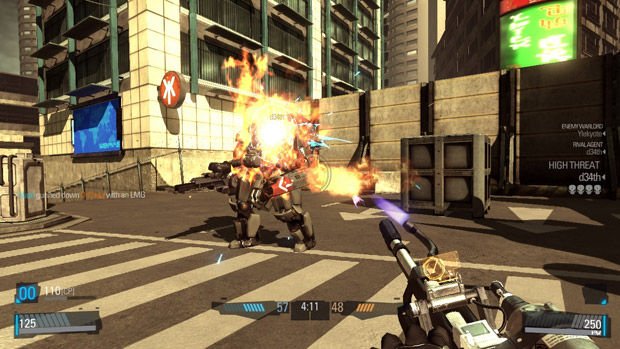 “We have [a PS4], but we haven’t gotten in our own art, and we haven’t gotten it really dialed in. I honestly don’t even know if the [controller] actually has LEDs in it, truthfully. We have it, and I’ve been like ‘Holy fuck, this is so awesome!’ but we’re still focusing so much on just getting the engine updated, getting it to actually talk to the PlayStation, getting all that stuff to actually build that we’re not even rendering yet. It’s just so much that the guys are working on right like building our own backend, connecting it to the PlayStation Network — I have a feeling by E3 when you see me I’ll just have gray streaks everywhere.

“It’s pretty wild, it’s fun. If we can even make a moderately successful free-to-play that’s going to be a huge success for us. With most free-to-plays, the money that you have coming in is not going to buy a Lamborghini or anything, it’s to keep the game going. If it becomes a success then the game will become even bigger and we’ll be able to put it back into the community and all that fun stuff.”

Zombie Studios is aiming to release the new Blacklight a few months after the PlayStation 4. “I’d love to be able to do day one,” Jared tells me, “but that’s completely out of my control sometimes.”