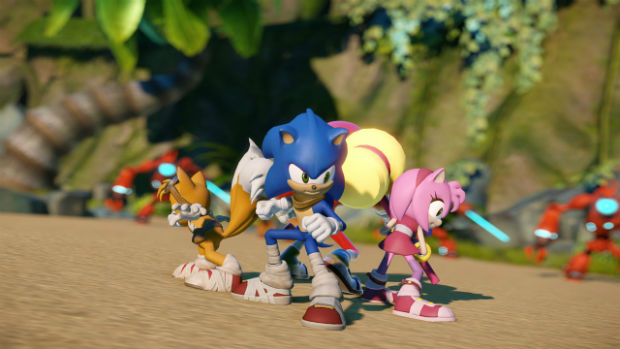 ‘Linear experience with spokes and discoveries’

Sega made waves yesterday with their announcement of Sonic Boom — which is a television series, a toy line, and a set of two games for the Wii U and 3DS. While Sanzaru Games at large wasn’t on hand to discuss the 3DS iteration (nor was it shown), Bob Rafei of Big Red Button spoke to Destructoid and shined some light on what to expect gameplay wise.

When asked how level transitions would be handled, Rafei stated, “it’s more of a linear game with lots of little sandboxes, and not an open world. We want players to have a clear path to follow but the worlds will consist of multiple spokes and wheels, allowing for branching paths for more veteran players. But we wanted players who weren’t as skilled to be able to follow the core path.” Co-op was also confirmed in the form of four player support.

Sonic Boom will also be more combat oriented than ever before, as Rafei noted that “it’s not all about speed. We’re also focusing on a hard hitting combat system, with major playstyle differences between the four characters.”

It makes perfect sense that Sonic Boom would follow a “miniature sandbox” route, given the fact that Rafei worked on Naughty Dog’s Jak and Daxter. The similarities between the two games strictly in terms of art is also hard to dismiss, as the first Jak and Daxter game and Sonic Boom both share a tropical island theme. Rafei also stated that some of the team worked on Ratchet & Clank as well, another influence I linked as soon as I saw the footage.

It’s strange that Sega would switch gears so soon after Lost World, and it’s even stranger that they have confirmed that Sonic Boom will not be released in Japan at this current time. But with a pair of hungry western studios at the helm with everything to prove, I’m hoping Sonic Boom delivers.