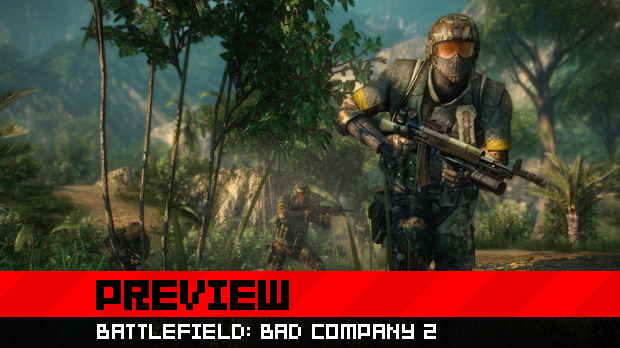 Apparently I suck majorly at first-person shooters. A genre I’ve only recently gotten into, thanks to games like Left 4 Dead, Half Life, Team Fortress, and Borderlands, I figure I’m a capable FPS player after a couple rounds of introduction.

You see, I tried three hours of multiplayer rounds of Battlefield: Bad Company 2, and proceeded to get my ass handed to me by the PR reps, by my fellow journalists, and even the assistants to the journalists. Great. In between rounds of me cranking out kills of four (everyone else were making closer to 30 kills), the word on everyone’s lips was Modern Warfare 2. Not the oddest thing to compare, seeing as they both share a lot in common, and would explain why people were so damn good at it. However, Battlefield: Bad Company 2 is working to make sure it stands out from the crowd in an increasingly dominated market.

Hit the jump for my hands-on with the multiplayer of Battlefield: Bad Company 2.

EA was pretty intent on getting us right to business with the game. With controller in hand, we were introduced to the modes of play. My favorite, Conquest mode, is one of the returning multiplayer options. It’s your typical control point mode, the good ol’ standby for people like me. However, also coming are the Squad Deathmatch. Squad Deathmatch is a deathmatch mode of four teams of four taking each other on to reach a certain kill count. It’s fairly standard, and a good team will work together.

The modes we spent the most time with were Squad Deathmatch and Conquest. Squad Deathmatch, as far as standard death matches, was a blast. It was great, because I can choke up and be a horrible player, but having a great teammate means we could win overall. I think it could be great for bringing in newer players. 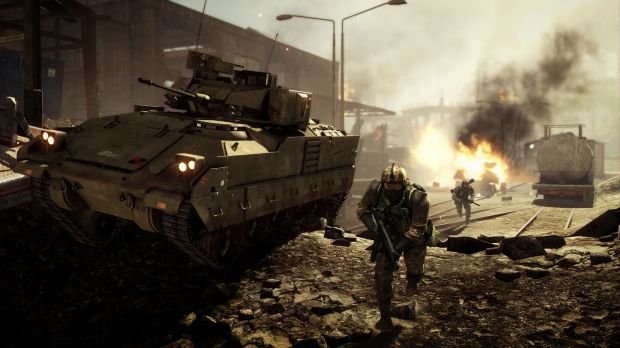 Conquest is just as you would expect, and possibly the only mode I could adequately keep up with the others. After all, shooting dudes in the face takes a little hand/eye coordination, but running to a spot and hoping you don’t die is a solid strategy for any player. There was also a mode that involved rushing to a tank and taking control of it. When in possession, it is easy to dominate, but a smart team with an engineer will make short work of that.

Each of the levels I saw offered some interesting tactics. Laguna Presa, has wide open expanses of shallow water. Hanging out there with a rocket launcher, with a full view of much of the map, was a pretty decent strategy…that is until the tank charged me an ran me over. Oops. Then there was the Panama Canal ship yard level. With lots of hiding areas, this level was perfectly designed for staying high and low for sniping and melee kills.

Interestingly, EA and DICE have introduced a new feature for the game. Called Realism mode, body parts can be more realistically damaged, and it take fewer shots to make a kill. Friendly fire is on, there is no kill cam, mini map is gone, enemies don’t show up with icons, and there is no crosshair. It is a mode for people well beyond my skill level, and the ranking here should help separate the wheat from the chaff. 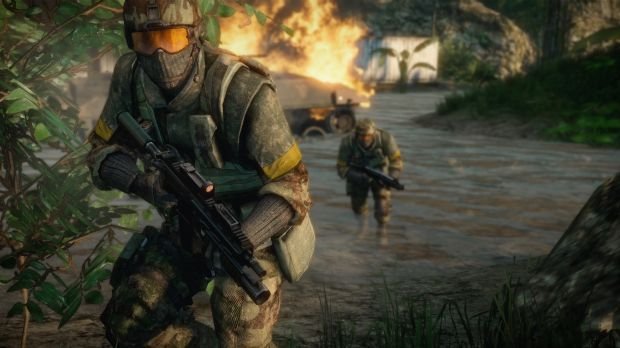 Destruction again makes a big comeback to the game, as buildings can be destroyed with a well placed rocket or shot from a cannon. It’s a pretty good way to cause drama for the opposing team, especially when they are hiding out in bunkers and buildings.

Vehicles are a blast. For our Conquest matches, we would rush to tanks and ATVs and blast across the map. Sure, the ATVs were like zooming straight into live fire, but launching off rubble was awesome. Tanks, too, are a pure force to recon with. However, a smart squad will have an engineer, who can make short work of even the best tanks. Coolest item of the event was located on the roof of one building. Go to a computer terminal, and control a miniature helicopter which can acts as recon, as well as deal some nasty little damage.

Weapon and character upgrades are in full effect, of course. Every time you pull off decent work, experience, weapon upgrades, vehicle upgrades, and more will come down. They seem to be a little bit more realistic than Modern Warfare 2 (less knife kills), but they make a strong effect on the battlefield. Split between the four “kits”, players can be “assault”, “engineer”, “recon” and “medic”, with each offering different weapons and upgrades. Each offered obviously different of approaching enemies. Running around a picking up dead enemies kits, however, allows players to change class on the battlefield, if they so please. 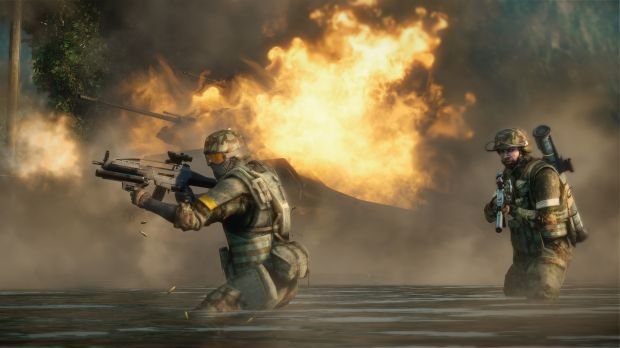 Graphics seem to be coming along fine, especially in the Panama Canal level. However textures were fairly ugly, and many of the plants were ugly and pixelated at best. In cohesion, the game looks pretty good, and other than the hiccups and odd visual alpha bugs, seems to run just fine.

So yeah, it looks like Modern Warfare 2 and Battlefield: Bad Company 2 have a fair amount in common. While not necessarily a bad thing, they also have some time to get all of their choppy issues out of the way for the March 2 release. If EA promises to keep the quality of this game up to par with the last one, they should have little to worry about.