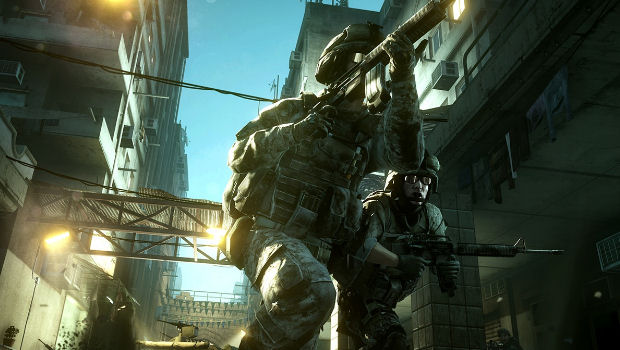 Battlefield 3 went into beta yesterday, and despite some controversy with people not getting their codes when promised, things have kicked off relatively smoothly. I got to spend time with the PC version of the game, and I’ve come away mostly impressed.

With Battlefield 3, my one major worry was that so much time had been spent on the graphics, the actual important stuff would feel lacking in energy. Having finally tested out the “Rush” mode presented in the demo, my fears have taken a dramatic downturn and my hopes have conversely boosted.

Before we kick off, I can’t help but do the obvious thing and gush about the visuals. Those graphics are something else. As I said, I’m testing the PC version of the game, on a new rig that Nvidia helped set up for me specifically for instances such as this. I’m using an Intel i7-2600k @3.40 GHz, with 8GB of RAM, and the GPU is one of those new-fangled GeForce GTX 580 deals in SLI.

On that little setup, Battlefield 3 is easily one of the most beautiful things I’ve ever seen. In fact, real life looks like shit in comparison. I could nitpick about how the water effects need a little more work (it doesn’t look too convincing when players are swimming in it) or the occasional physics glitch, but this is a beta, and the overall product is simply stunning.

Fortunately, the gameplay seems to be holding up its end of the bargain as well. It’s certainly nothing innovative — this is a military shooter with classes, experience points, and unlockable equipment, after all — but in terms of sheer refinement, BF3 makes for a surprisingly silky affair. Rush Mode has one team pressing the attack against bases that move across a huge map, which could easily be three maps, and the natural sense of flow that one gets is incredibly pleasant.

Battlefield 3 is a fast game. You spawn fast, you kill fast, and if you lose concentration for a second, you’ll die fast. It’s a faster game than any other military shooter on the market, to the point where victory in combat is all about who spots who first. Some may dislike that, especially fans of heavier, Halo-esque multiplayer, but I personally dig the focus on quick reflexes and good positioning over attrition and strafing.

My first impressions of the game are quite positive overall, and I’ve come away with a lot more than I was expecting. We’re so close to the review that I don’t want to get into too much detail, but I’ll say I’m looking forward to the full game far more than I was before I tried the beta.

This browser-based Battlelog stuff? That is a crap setup, and I cannot emphasize that enough. Having to open Origin to open a tab in my browser to access a very limited menu isn’t my idea of entertainment, and runs counter to the gorgeous fluidity of the in-game experience. One can’t even fine tune the game’s video and controller settings within the browser. If you want to make those kind of alterations, you have to start a match, wait to spawn, and then tinker with them while you ought to be playing the game. You can’t access the menu between respawns, or during the post-game lobby. It’s absolutely ludicrous.

This very silly implementation most certainly detracts from what is shaping up to be an otherwise impeccable game. I cannot wait to drink in the spectacle of the full product, and I’ve never been more excited for the PC version of a title especially. However, Battlefield 3 is suffering through lack of a proper menu system, and the mandatory nature of Battlelog places proprietary services over and above usability or player convenience.

Such an attitude is about as ugly as Battlefield 3 is beautiful.