Bonus footage of me noobing it up!

When I think of my time with EA DICE’s Battlefield series, two thoughts reach out and smack me right in the face: 1) going to LAN cafes and playing Battlefield: Bad Company 2 with buddies and having a great time, and 2) getting sniped every ten goddamn seconds. That first thought is what has me excited for Battlefield 1, so I was eager to chew through the closed early alpha.

It’s hard to say whether folks contributed to this new game having the most-liked trailer on YouTube ever because they hate Call of Duty: Infinite Warfare so passionately or are just that enthusiastic about EA DICE’s decision to set it during World War 1.  If it’s the latter, I hope those folks can temper their expectations somewhat.

I don’t mean that in a pejorative sense at all. The six or so hours I’ve spent in-game have been exactly what I wanted, but also exactly what I expected. The grimy new aesthetic of the early twentieth century provides a welcome change of pace for the series. Weapons have a chunky, analog feel to them that I can’t get enough of. There are small improvements abound that I appreciate that I think add up to a better game, but it’s still Battlefield in the end (which is good! I’m belaboring this point too much!).

In this early alpha, there’s only one map: St. Quentin’s Scar. Both Conquest and Domination modes are available, but I spent the majority of my time with the former so I could focus on 64-player matches. This map feels huge, as is par for the course of the series, but I really dig how different each capturable point plays out every match. One point is in a small currently-pristine-soon-to-be-demolished village which leads to close-quarters combat (and plenty of bayonet charges, which are incredibly risky and fun). Another point is a ruined monastery atop a hill, where tense sniping battles culminate in tank charges that push those pesky sharpshooters right out.

Upon this game’s announcement, many jokes were made about how this was basically Battlefield: Trench Warfare. Curiously, there’s only one set of trenches to do battle in on this map, and it’s entirely too close to one team’s base and therefore is rarely used for battle. That’s unfortunate since stomping through mud as bullets whiz by in the trenches is stressful in the right ways. Hopefully other maps utilize this type of terrain more thoroughly. 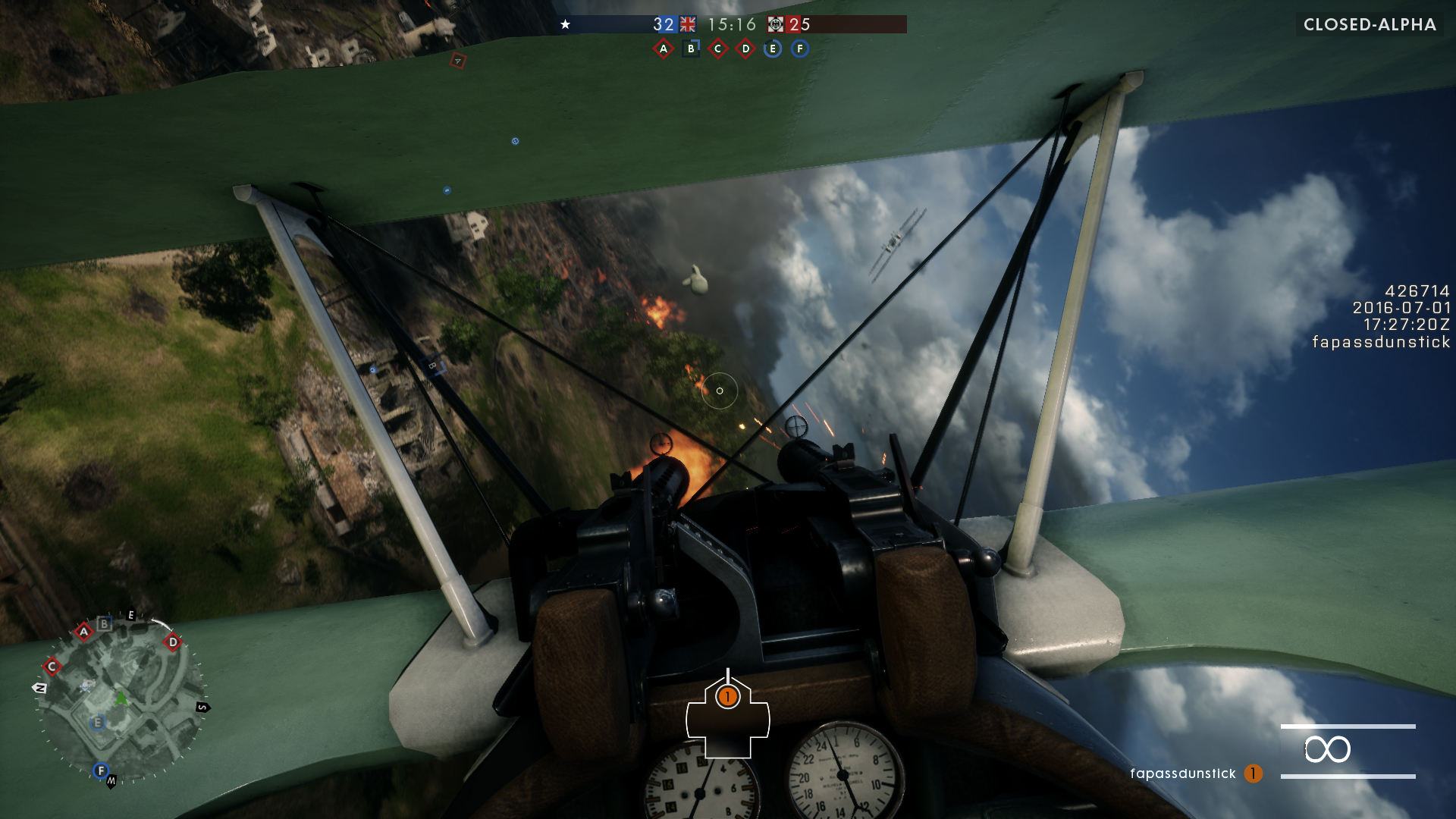 Dynamic weather is more substantial than I had expected. Instead of merely providing set-dressing to make maps seem more varied, fog and rain can force players to drastically change their tactics. Scouts in particular seem to have taken a liking to laying prone in shrouds of fog, picking off soldiers that stick to clearer areas on the road. Rain makes everything a chaotic mess, every drop betraying your eye, making you think an ambush is around the corner. Flying bombers over fog clouds is one of my favorite things I’ve ever done in a Battlefield game.

Flying is as tricky as ever, but getting into planes is easier than before. Instead of waiting for a jet to be available, a small indicator next to your home base shows how many ground and air vehicles your team has at current. When it refreshes, you can choose between three in both categories instead of each vehicle being its own separate spawn. In general, EA DICE seems to be applying the sleekness of Battlefront‘s interface here to great results. The clean menus are clear and concise, almost feeling like an anachronistic juxtaposition against the World War 1 setting, but it’s an improvement that I enjoy.

The only problems I’ve had thus far is getting stuck on some fences while trying to vault over, and a couple of driver crashes on my graphics card. Those are expected issues at this point, so when they’re fixed and there are more maps and weapons to play with, I imagine I’ll be playing Battlefield 1 for some time. It’s not revolutionary (and you shouldn’t expect it to be!), but I’m still excited to get down in the trenches.

And yes, my Origin ID is fapassdunstick. Blame my brother.