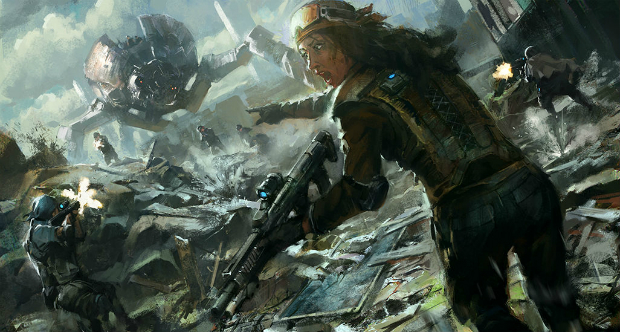 Asymmetric multiplayer is always interesting to me, because as an idea it could fail spectacularly if proper balance is not achieved. The Left 4 Dead series has handled it quite well, with each side having a decent chance of defeating the other. The team behind the recently announced Outrise invokes L4D in its one-sentence pitch, but it gets even better. The developer describes the game as “multiplayer Shadow Of The Colossus meets Left 4 Dead and with old school sci fi look and feel.” Yes please, I’ll take two.

The main element that differentiates Outrise from those two legendary titles is that one player controls a gigantic mechanical war robot, while fifteen others work together as puny humans to topple it. The human players can pilot vehicles, control small bots, and climb on the mech itself, while the robot can retaliate by stomping them all into a sticky red paste.

Thus far, the project only has concept art and the written ideas to show, but it is being developed by a small team of including industry veterans with experience on games such as Metroid Prime and Hawken. It is clearly very early in the development process, but this looks like one to keep an eye on for the future.