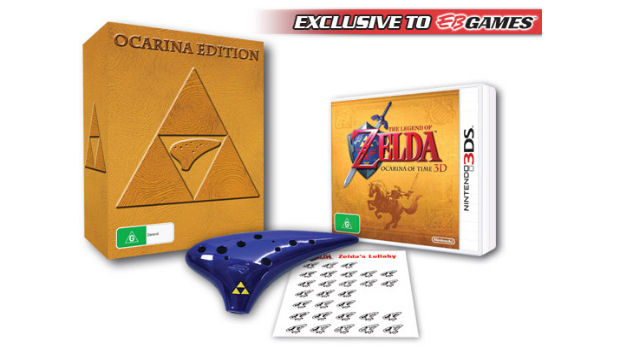 Nintendo’s commitment to giving different countries wildly different things in varying degrees of quality continues, with word that Australia has the opportunity to get the rather desirable Ocarina of Time 3D: Ocarina Edition. Niiiiiiice!

Exclusive to EB Games as a pre-order gift, the 3DS title comes in a snazzy box which also houses a real-life ocarina, similar to the one Greek gamers can obtain as a pre-order bonus. Sheet music is also included, allowing players to recreate The Lost Woods song and annoy everybody with it.

Meanwhile, the UK gets a poster. Poor UK.

Nothing has been confirmed for North American gamers thus far, but one can expect it to be different and weird, because that’s what Nintendo seems to like doing. I’ll punch a baby in the dick to get that ocarina, though.