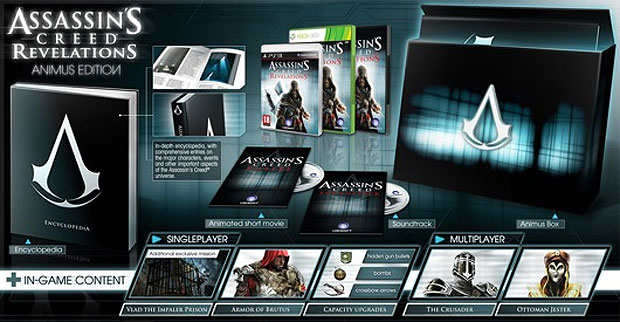 Gamers are no strangers to wild special edition versions of Ubisoft’s Assassin’s Creed franchise. Hell, before the series was even a hit, the publisher released a version of the original in a special tin with an (underwhelming) figure of the game’s lead.

It looks like Asssasin’s Creed: Revelations might be getting the same treatment. An “Animus Edition” of the game has cropped up on GameStop Ireland’s website, featuring a slew of goodies for roughly $143.

In addition to special packaging, we’re talking a soundtrack, a short film called Assassin’s Creed Embers, an “in-depth encyclopedia,” and in-game content. That content includes a single-player mission set in the prison of Vlad the Impaler (awesome!), weapon upgrades, the “Armor of Brutus,” and two multiplayer characters — the Crusader and an “Ottoman” version of the Jester. Oh, and one “exclusive” customization item. Say all of that ten times fast.

It’s unclear how much overlap there will be between this and the Revelations “Signature Edition,” which is an auto-upgrade for folks who pre-order the game with GameStop in the United States. That edition will include an extra single-player mission, a multiplayer character, a short film, soundtrack, and some weapon upgrades. Sounds similar, but what of that fancy, fancy box?

We’ll check in with Ubisoft to see what their plans are. But for now, it seems like Irish collectors are cashing in on that fabled luck of theirs.