How to find the grass gym and fight its leader

After you finish the bug type gym in Cortondo, your next stop is Artazon, to take on the grass type leader, Brassius. It’s on the opposite side of the map as the first stop on your Victory Road tour, but we have plenty of screens and instructions to help get you there, and clear it.

You’ll find the Artazon grass type gym due east of the academy, at the location directly above. It’s only a few minutes by mount.

To kick off the gym questline here, you’ll need to enter the gym building (in the gallery above), and speak to the front desk NPC.

After exiting the gym, look directly to the right and talk to the NPC in front of the pen to kick off the Sunflora Hide-and-Seek gym test. Your job is to gather up 10 errant Sunflora in Artazon, then return to the pen. Do not focus on the pen itself: there are no Sunflora in there.

Here’s a quick path to gathering up 10 of them fast:

All of the locations in the gallery above have a little spot on the minimap (lower right-hand corner) to show off exact coordinates, if you need them. You don’t need to take this specific path too: as there are more in other locations. 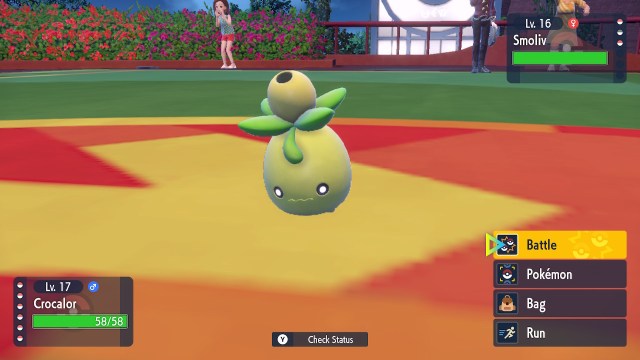 After the Sunflora Hide-and-Seek is completed, go back to the gym to kick off the fight with Brassius, and earn the bug badge. You will just be battling with Brassius here, who has three Pokemon (there will be no side fights or trainers to deal with).

If you started with Fuecoco, you’re going to have an easy time with the fire element, as grass is weak to it. You can also opt for ice, poison, flying, or bug.

Here are Brassius’ Pokemon (note that he will terastallize his third):

Once you down Brassius, you’ll get 3,060 Pokedollars, TM020 (Trailblaze), and the grass badge. Pokemon up to level 30 will be easier to catch and control with two badges. Six more gyms to go!