It’s part of the main story, but you’ll need to wait a long time to actually battle with them

Koraidon and Miraidon are the new generational legendaries, but they’re also weaved directly into the story of Pokemon Scarlet and Violet.

Here’s a brief explanation of how you’ll unlock these creatures, which is actually a tiered process of sorts.

You’ll meet Koraidon (Scarlet) or Miraidon (Violet) very quickly, but you can’t do anything with them yet

Around 30 minutes into the core game, you’ll encounter your appropriate legendary as part of the unavoidable main storyline.

It’ll be in pain washed up on a beach, and after nursing it back to health with a sandwich, you’ll follow it into a cave: where it’ll save you from danger. From then on you’ll be bonded with your legendary, but you can’t ride them or use them in battle. 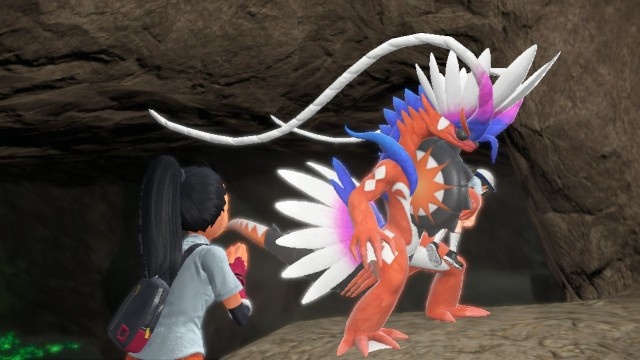 Once you completely finish the tutorial, you can at least ride them

Fast-forward to an hour and a half in (or more, if you dilly-dally around the few open zones before the academy): after speaking to the director of the academy and touring the school, you’ll unlock the mount mechanic for your legendary. Press “+” to mount them anywhere in the open world.

However, as part of a canned explanation for why you can’t actually use these powerful Pokemon in battle yet; an NPC will inform you that they’re “in a weakened state’ as a result of the aforementioned narrative beat, and cannot battle until a later point in the story. As a result, they do not take up a spot in your team of six at this time.

If you want a full breakdown of the tutorial to find out when you’ll be able to pass any of these milestones, you can read it here.