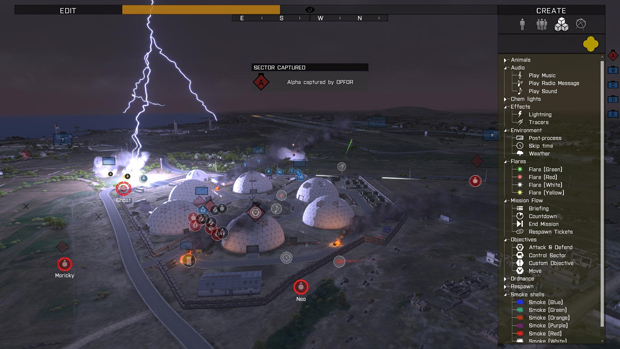 Curate personalized experiences for other players

Taking a cue from Dungeons & Dragons, the free Zeus DLC planned for Arma 3 in Q2 2014 will give players the opportunity to become GMs across existing game modes and a new one called Zeus Game Master. It’s here that they have the real freedom to dictate objectives, spawn units, and more. And since this is Arma, the Zeus system will be open to modders.

“The best thing about Arma 3 Zeus is how naturally it fits within the game,” said design lead Karel Moricky. “Dynamic combat, massive islands, and editing features — it was all there. But now we’ve added an interface which gives players full control over the multiplayer experience.”

This DLC is something which sounds intriguing in the unexpected context of a game like Arma III but also slightly terrifying — I’d surely stick with being a mere pawn in the grand scheme of things. For a certain type of player, though, the role of GM will be a blast.