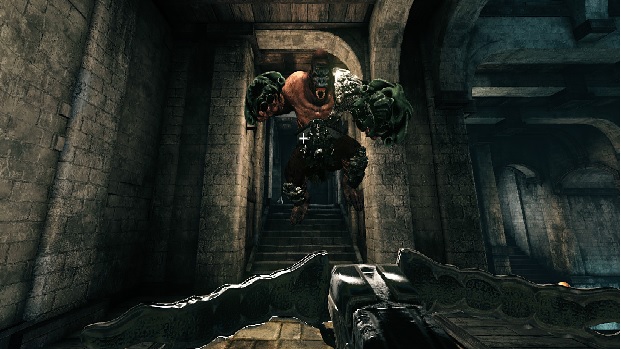 They had me at high-speed, shotgun-toting primates

“Sooner or later, everything old is new again.” — Stephen King, The Colorado Kid

As Darren Nakamura noted in his article, it seems that twitch-based arena shooters are making a comeback of late. Quake Live recently re-launched itself on Steam to positive user reviews, Reflex is now up and running on Steam Early Access, and it looks like Toxikk is still in the works.

The latest back-to-basics, competitive shooter to cross my desk is Mad Ram Software’s delightful Wickland. Heavily inspired by the multiplayer shooters of the ’90s, it has a frenetic pace akin to the classic frag-fests of yore with a nostalgic art direction that suits it perfectly. Have a look at the Early Access trailer above and you’ll see what I mean. Some titles try too hard to get that “authentic” retro look and feel, but Wickland seems to pull it off with ease.

What really made Mad Ram’s shooter stand out to me is the morphing mechanic. Instead of unique weapon pickups on the map, you’ll acquire better firepower and tactical opportunities by locating items that will grant you the ability to transform into the eight different beasts in the game; each with their own particular close- and long-range fighting style.

The title released today on early Steam Early Access and is currently available at a reduced price of $6.99, with the full release scheduled to drop in about three months. Features available in the EA build include all eight beasts, three arena maps, a Warm-Up mode (Deathmatch), power-ups (Health and Armor), and a basic spectator mode.

I have a sneaking suspicion that I’m going to be playing quite a bit of this over the weekend. Its authentic old-school charm and fast-paced arena PvP combat look like a winning combination.

Make sure to keep an eye on the front page as we’ve got several codes for the game that we’ll be giving away to the community in the very near future. Stay tuned!