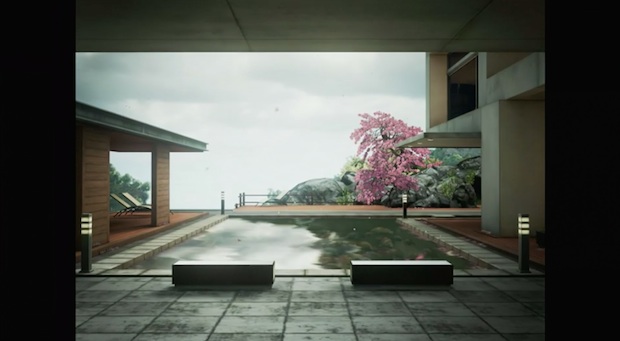 Apple announced their new technology, called Metal, today during their press conference in San Francisco. Metal reduces the overhead between game and hardware with up to ten times faster draw recall rates for A7-powered Apple devices. They’ve been working with leading providers like Unity, Crytek, Epic and more to bring console-quality graphics to these devices..

Epic Games’ Tim Sweeney took the stage to show off a tech demo they created with Metal, called Zen Garden. A demonstration of this app, running on iPad, showed just how much graphical power  is gained from Metal with its lush environmental effects, water shimmering, and lighting.

A “huge amount” of materials are available with no impact, says Sweeney. A tree covered with blossoms featured 5,000 individual petals that each freely fell to the ground, responding to user touch. A koi poind with hundreds of fish had each with its own AI that allowed them to react to a finger dragging through the water; Metal cleared up enough resources to make this possible. A final display had water turning into hundreds of individually animated butterflies. Thousands more joined in the fluttering soon after, filling the screen.

Sweeney said that this could not have been done before Metal.

The Zen Garden app will be free on the App Store once iOS launches later this fall.