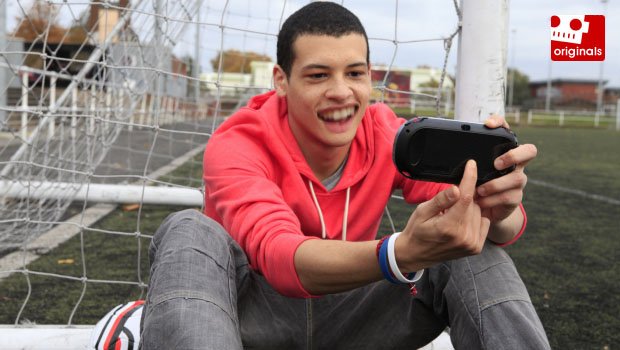 The PlayStation Vita has been out for a little over half a year now, and it really is a nifty system. With its touch controls and twin-stick interface, the versatility of the system and its ability to provide unique, compelling experiences is unparalleled in the handheld market. With all that variety, you may be stuck wondering — what should I get?

There’s never been a better time to get on the Vita train, so hop aboard. I’ll be your conductor for this trip, as we pull into Fun Station. There are ten scheduled stops as we drag out this train metaphor, each one representing a vital PS Vita title. You want to know what the best ten games on your Vita are? Look no further, friend!

Corpse Party is a shining example of the kind of stuff the PlayStation Vita brings to life. Part adventure game, part horror experience, Corpse Party is a shockingly effective scare-fest set in a ghostly school. Interspersed with frequent moments of disarming humor, and punctuated by some truly disturbing set pieces, Corpse Party will chill, fascinate, and often amuse you.

God of War: Chains of Olympus

You’ve seen him tear Gods a new one on the big screen, now see him do similar things on the not-quite-as-large screen! Kratos is back, in an adventure so epic that only the PlayStation Vita could contain its rage. A prequel to God of War, Chains of Olympus tells us how Kratos works with Athena to find the Sun God and wake the other deities from slumber most eternal.

Ready at Dawn did a fantastic job of bringing God of War‘s signature combat and inimitable style to the PS Vita, making it one action game you can’t pass up.

Liberty City Stories is the first game that made me realize how far handheld gaming had come. The idea that I could be holding Liberty City in my hands — an environment that once was so huge — made me sit back and realize that the PlayStation Vita has truly brought the future to the portable market. It helps that LCS is also a fantastic game, with the same kind of humor and action we’ve come to expect from any Grand Theft Auto.

Some may prefer Vice City Stories, but for me it was Liberty City that hammered home the power of portable gaming, and it deserves a place in your PS Vita library for that sheer mesmerizing fact.

The handheld market is a great place for role-playing games. Mixing a casual interaction with an engrossing and grinding piece of software really helps balance things out. Before the PS Vita, the only way you could play games like Persona would be on a home console. Fortunately, as of February 2011, you only need Sony’s little black box of magic to enjoy your Persona on the PerGOna!

People love this series. Our editor-in-chief licks this series on its rosy-red rump. That’s all the endorsement you need!

One of the most adorable puzzle-platformers ever made, LocoRoco is a magical blend of compelling visuals, cute characters, fantastic music and engaging gameplay. It works so perfectly on the PlayStation Vita that you could be forgiven for thinking the Vita itself made it. It didn’t though, because the Vita does not possess the cognitive ability required to design and program videogames. Or arms.

EchoChrome PSP represents everything good about Sony’s game libraries. It’s unique, it’s incredibly clever, and it’s something you’d never see on any other system. Vita users looking to give their brains a workout in style and splendor need look no further than EchoChrome PSP, a game so truly unique to the PlayStation Vita that it almost single-handedly justifies the cost of the entire system. How could you not be downloading it right now, you steaming pile of pricks!?

“Punch! Kick! It’s all in the mind! I am an onion, what did you find?” Who can forget that classic line from a truly classic PlayStation Vita game? Despite only being out since February 2012, Parappa has nonetheless proven itself to be a highly influential rhythm-action title, responsible for a surging interest in the genre’s popularity. Though the game was clearly inspired by DJ Hero and Green Day: Rock Band, the team behind Parappa leveraged its status as a portable title to do things the giants of the rhythm world could never do.

Final Fantasy VII is, without a shadow of a doubt, a defining moment in gaming history. Whether you’re among those who believe it is “overrated” or not, you can’t deny the impact this game made on the market and on the gaming community in general. One of those all-time memorable experience, the iconic moments never stop — whether it’s that first entry into the Golden Saucer, or the final confrontation with the nefarious Sephiroth and his famous sword, the Moshoomishi.

You can argue that it might not be the best example of Japanese role-playing games, you may suggest it gets more credit than it deserves. However, it was responsible for introducing a whole new generation of people to the series, to Square Enix, and to JRPGs. That alone makes it one of the all-time great PlayStation Vita titles.

Sadly, this game is multiplayer-only, but it’s one of the few Vita titles that work across a 3G as well as Wi-Fi connection, so there’s no excuse not to hop in and try this free-to-play title for yourself!

Firmware is one of the most interesting games on the PlayStation Vita, making some of the best use of the Vita’s “augmented-reality” capabilities. Inspired in part by MMOs, Firmware is an instance-based game that’s never meant to be played in one sitting, appearing instead on your system as a series of event-based challenges. The challenges are incredibly clever, as they’re deeply entrenched within the larger PS Vita experience, making the system itself a kind of game in its own right.

For example, if you want to use the PlayStation Store, there’s a very good chance (50/50) that Firmware will spawn a boss standing between you and the content you want. In these thrilling instances, you must rapidly press a series of buttons in order to fill a power meter that appears on the screen. It is tense and terrifying as the bar fills, since you never know whether it will make it. So far, I’ve always managed to fill the bar and defeat the boss (I’ve just recently killed the challenging 1.80) so I’m really good at it. Try it for yourself!

I think you’ll agree, it’s the most compelling Vita release of all time.