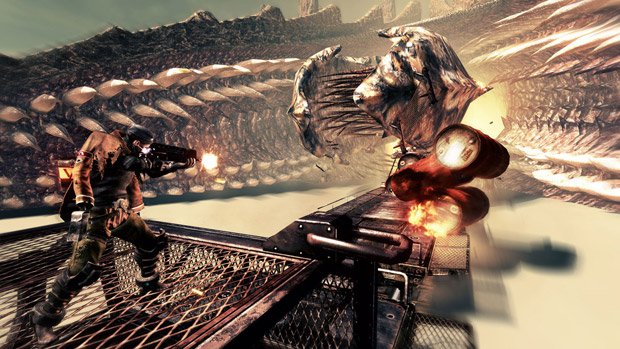 Unless Capcom pulls some crazy-stupid move between now and February 23, Lost Planet 2 is going to be one of next year’s most enjoyable co-op games. The development studio hasn’t exactly been known to do a silly thing like that, so I think we’re mostly in the clear here.

Without warning, a massive amount of boss-centric screenshots have been tossed our way on this day of feasting. One’s named Red Eye, while the other baddie goes by Akrid X. I’ll let you figure out which one is which.

Recognizing some of the many images as being previously used, I tried to filter through the mess and only upload ones I thought were relatively new, or at the very least, looked pretty effing cool.

The fact that you fight the worm-looking fellow on a moving train has me thinking we aren’t even close to figuring out most of Lost Planet 2‘s numerous surprises yet.