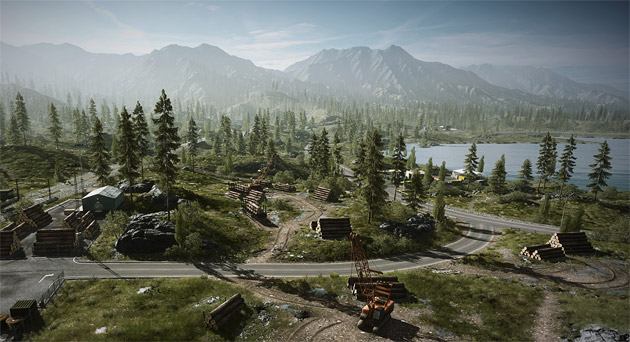 Building on what we recently saw of the End Game expansion for Battlefield 3, DICE has another batch of screenshots, this time focusing on the four new maps. “Size-wise, they are comparable to Caspian Border and Operation Firestorm from the base game,” writes the studio, “while the flag layout resembles that in our previous expansion pack Armored Kill — Meaning that we have spaced the capture points and bases to make full use of the entire Battlefield.”

Operation Riverside, Nebandan Flats, Kiasar Railroad, and Sabalan Pipeline support End Game‘s new Air Superiority and Capture the Flag modes, the latter of which has been detailed here and sounds like it’ll be a good deal of fun. As someone who tends to dislike CTF, I can hardly believe I just wrote that.

“While all maps are carefully created to cater for the new dirt bike, the new AA vehicles should see heavy use on most of the maps as well. This new transport has a roof mounted turret that can switch between rockets and anti-air missiles to protect your infantry and combat air threats.”