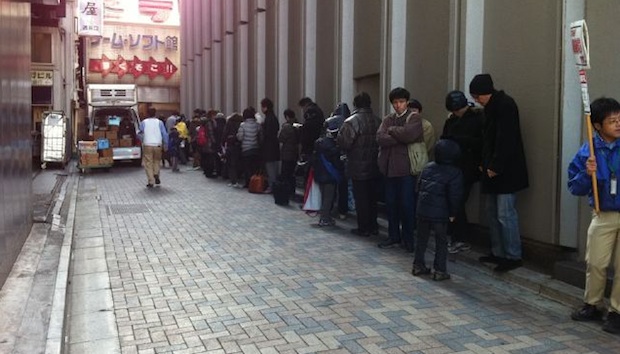 I’ve been in Tokyo for several other system launches, including the DS Lite, and they were all pretty crazy, just like they are in America. I really expected today’s Nintendo 3DS launch to be nuts here in Japan. People have been hounding store clerks for weeks asking about pre-orders and launch day line-ups. The system’s commercials are in heavy rotation and everyone is always talking about the system. I expected today to be totally bonkers…but it wasn’t at all.

A bit after I went back into the station to see if a friend I was meeting had showed up. When I came back to the store, everyone was gone. I was only gone about 10 minutes, but the entire line had disappeared! Going around back I found out that Yodobashi opened at 8:30 for pre-order customers to nab their systems. They blew through the line in mere minutes. From what I hear, that’s how it went down everywhere else today. Bic Camera, an equal sized competitor, didn’t open early, but reserve customers strolled up and picked up their system easily when they did. No crazed crowds or scalpers or anything. It was all pretty calm.

So where was everyone else? No one else bothered. Stores here in Tokyo made it clear that there was only enough for pre-order customers. It’s like Tokyo’s gamers have learned their lesson — they didn’t even get up this morning to check! They’ll get theirs soon enough. Amazon Japan is expecting more to be order-able next week. Nintendo hopes to ship 1.5 million to their people by the end of the first quarter of 2011.

What a relaxing day.