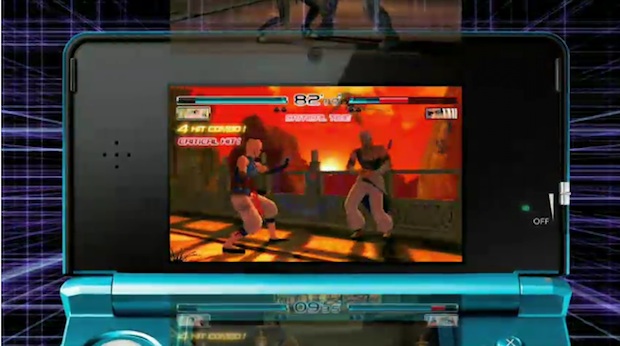 Team Ninja showed up at Nintendo’s Europe 3DS press conference today to talk a bit about their first game for the upcoming system, Dead or Alive Dimensions. They say that they’ve wanted to make a portable Dead or Alive for awhile, but never felt like a portable game system could handle their fighting game. Team Ninja says that between this new power and, of course, the 3D capabilities, they feel that this is the perfect time for the resurgence of the series.

Dimensions is going to be a sort of best-of of the DOA series. It will contain highlights and characters from all the series games. An extended trailer showed all of the series’ cast going at it, with that silly simulated 3D ‘coming out of the screen’ effect they’re doing these days. Full English voice work was also showcased in this trailer.

Some of the communication features were also touched on at this press conference. DOA: Dimensions will support internet play, local play, co-op and StreetPass modes. The game will feature a touchable move list on the 3DS bottom screen. It seems as if you’ll be able to execute combos by simply touching commands.

Filed under... #Dead Or Alive#Team Ninja