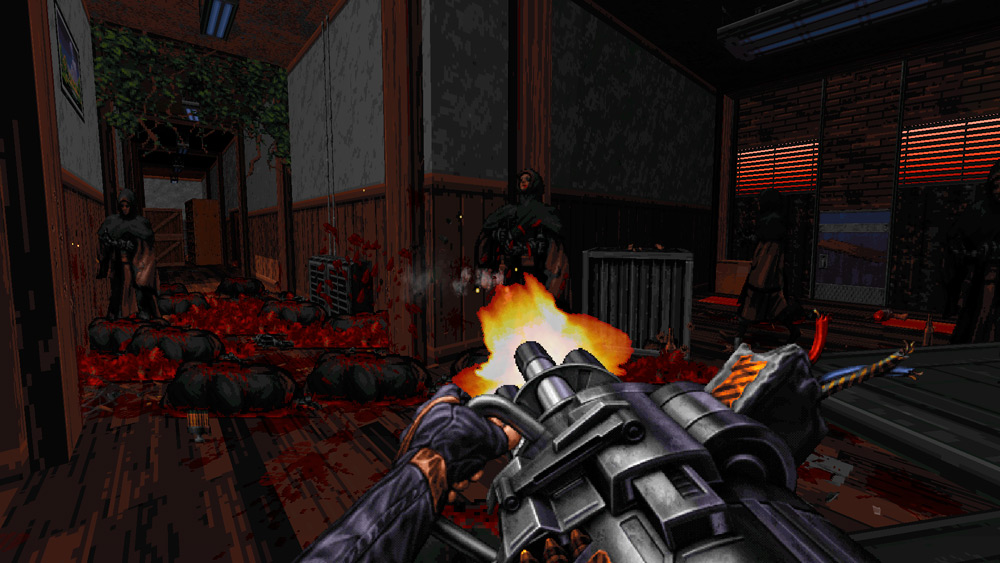 If you’re as old as me, hearing the name 3D Realms probably works like a harp in film, activating a flashback sequence that returns you to the days of your youth spent in front of a computer screen, playing one of the most parental pearl clutching games of all time: Duke Nukem 3D. Maybe you remember them for Shadow Warrior or even earlier than that when they, as Apogee, ignited the unstoppable fire that is the FPS genre in 1992 by publishing Wolfenstein 3D. I’ve always associated 3D Realms with games I know my mother wouldn’t want me to play but would anyway.

Despite creating the most ’90s game imaginable in Duke Nukem 3D, 3D Realms squandered its goodwill and quickly fell from prominence at the turn of the millennium. Most of the titles it’s known for were co-developed and published by other companies. It eventually stopped making games altogether with long-in-development titles like Prey and Duke Nukem Forever finding release at the hands of other developers and publishers. By 2010, 3D Realms was all but dead.

But as its heart stopped beating, an AED was applied with the arrival of Interceptor Entertainment, now called Slipgate Studios. First, the developer produced Rise of the Triad, a remake of the Apogee 1995 original which we liked. Then, in 2016, the studio developed Bombshell, which nobody liked. Speaking as a fan, a top-down shooter isn’t what people want when they play a 3D Realms game. They want that distinctively ’90s, fast-paced, run-and-gun action that made Duke Nukem 3D such a monumental title. And that’s exactly what they’re going to get with Ion Maiden.

I had a chance to go hands-on with the game in San Francisco with 3D Realms Vice President Frederik Schreiber. In a small hotel room, on a MacBook no larger than my own, I was transported back to my youth and the days of shareware the moment my fingers touched the keys.

“Our main philosophy has always been with a game like this we don’t want to make a retro shooter just for the fact of making it look retro,” Schreiber explained. “We want to bring back the classic, old school, big, open style of level design that has been missing from first-person shooters for decades. Not necessarily maze-like, they still have to be beautiful and open, but the most important thing for us is there were always multiple paths to the same objective in the game.”

Multiple paths indeed. The entirety of the preview campaign level I experienced absolutely oozed retro-chic. But unlike other throwback shooters we see popping up on Steam, Ion Maiden is truly old school. It’s entirely built in the Build engine, the same engine that powered Duke Nukem, Shadow Warrior and Blood. There are no polygons to be found. Everything here is original, hand-made pixel art.

“We really miss the extremely satisfying use of weapons and blood and gore, which it’s hard to do as satisfying [in 3D] than with old school games, because you can hand animate the way enemies just blow apart. That’s why a game like Brutal Doom is so much more satisfying to shoot enemies in than in modern games. We love the graphics from back then and we believe it’s an art form that requires as much talent as people who create highly-detailed 3D models. Here you have proper old-school art. We’re not just taking a picture and then making it low-res. In Ion Maiden, we’re manually placing every single pixel in different colors and drawing it from scratch. That’s real pixel art, another thing we want to bring back here.”

The game looks amazing in action and the bespoke pixel design really strike a chord with the part of my brain that’ll argue games don’t need all these fancy graphics because when I was a kid, yadda-yadda-yadda. But that choice to go this retro, in this fashion, is not without its difficulties, even when trying to creating something as simple as a flushable toilet.

“Stuff like this is crazy. When you know the technology limits for something like this it’s crazy. Because you can’t form 3D objects in Build engine — it’s not a real 3D engine — so it’s all these flat plains and sprites and they’re put together and moved when you move around them. It’s just very, very complex to make something resemble a toilet or a swinging door. But those details mean a lot because they make the game feel much more interesting.” 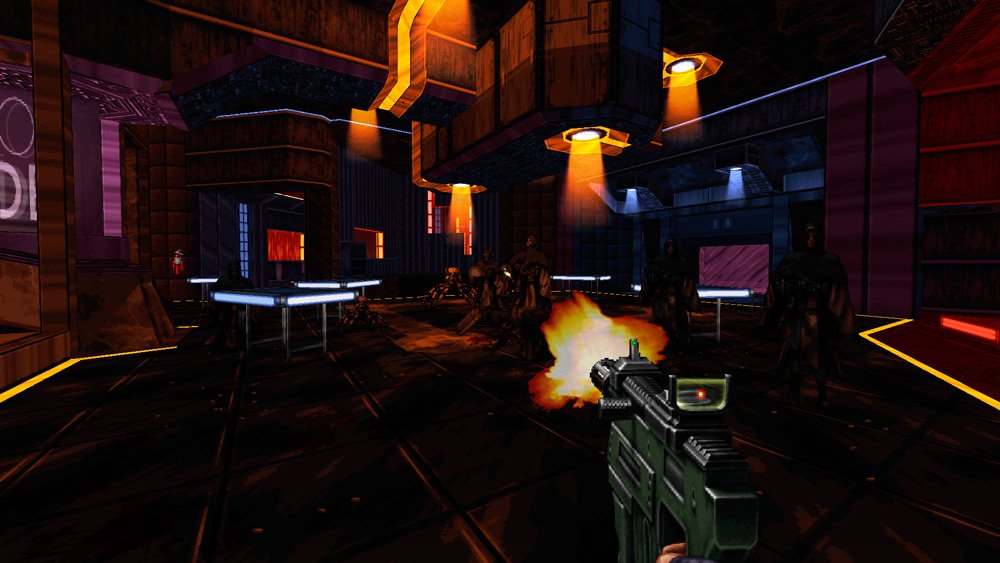 Ion Maiden is coming to PC, Linux, and Mac in just a few months, and I’m going to take credit for that last OS because it wasn’t in the cards when I first spoke with Schreiber. It’s being developed by 3D Realms and Voidpoint and takes place in the Bombshell universe working as a prequel to the 2016 game. Players will once again — or more likely for the first time — take control of Shelly “Bombshell” Harrison as she mutilates her way across big, explorable maps that hark back to the infancy of the genre. We’re talking exploding cyborgs, colored key cards, health packs, multiple paths, sweet-ass sound effects, Jon St. John, midi music, and secrets galore.

“Every time you play the game, there are new and interesting things to find. There are secrets sprinkled everywhere. We kind of tried to take the same approach as Super Mario Odyssey with the moons, where you can just play it again and again and there are always new things you can find. So every time you see something and think ‘Oh that looks interesting’ and wonder how to get up to it, if you manage to find a way up there you’ll probably be rewarded with a secret.”

It may have its roots in the ’90s, but Schreiber promises the game will feature improvements from the last two decades of first-person shooters. There are headshots, physics, widescreen picture, controller support, auto-saves, and nearly everything in the game has a level of interactivity. The Build engine has also had some work done on it, allowing for more colors and bigger stages that can change mid-way through. And everything is at a buttery smooth 60fps or better if your computer can handle it. 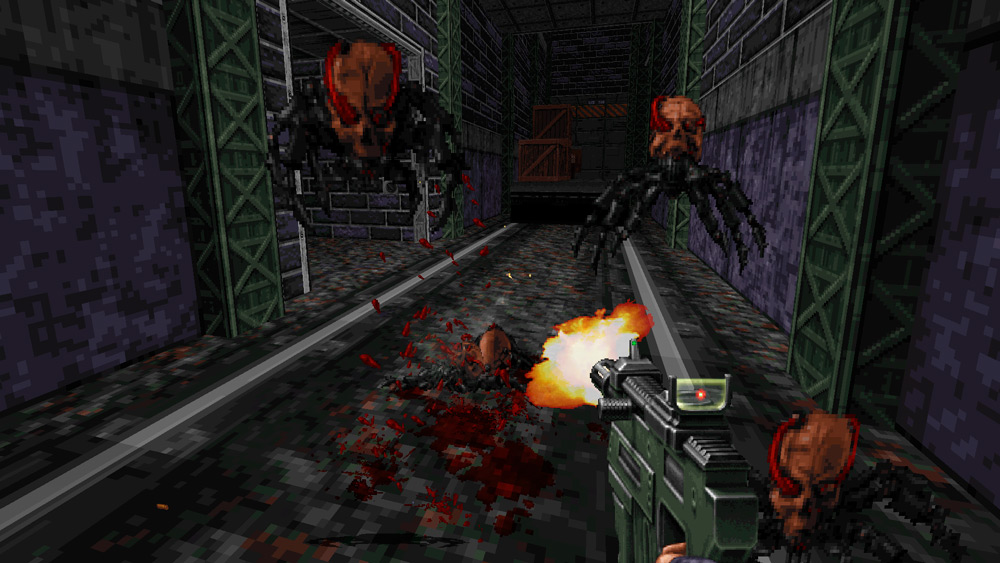 Because it is such a small team working on the game, Ion Maiden will launch with only a single-player campaign. However, there are plans for more modes and options to be added to it down the line.

“Right now, the game is single-player only, but we’re also planning on a multiplayer mode after release. The same with full modding tools support and everything you expect from classic 3D Realms games. We’re waiting on multiplayer because we want to make sure we’re not just ‘Here’s deathmatch, go have fun.’ You have deathmatch in a ton of games out there and it’s kind of growing a little bit old — of course with these weapons and graphics you kind of have to have deathmatch — but still it grows old pretty quick. You need something new. Right now, the flavor of the month is battle royale, who knows what it’ll be when this launches. So we’re trying to kind of figure out, instead of jumping on the bandwagon we’re trying to figure out what makes Ion Maiden unique and create a new multiplayer mode that is tailored towards that. We love multiplayer, but we want to do it right.”

That’s not a bad position to take when trying to launch a new FPS into this crowded-ass market. The most recent Doom title came up multiple times in our discussion — Schreiber had nothing but praise for it — and while that game has a campaign everyone loves, it also has a multiplayer mode that fails to set itself apart or above the competition. If 3D Realms can find a new way to play that isn’t the same old deathmatch or capture-the-flag, maybe it can start the next big trend in online multiplayer.

Ion Maiden will release in Q3 of this year for $19.99 with support available for English, French, Italian, German, Spanish, and Russian. You can find it today on Steam via Early Access. Purchase it now and you’ll get an exclusive preview campaign, the one I played during our interview, designed to give players a feel for the final product. Oh, and no promises, but they are in possession of a Switch dev kit and prototyping the game on it.