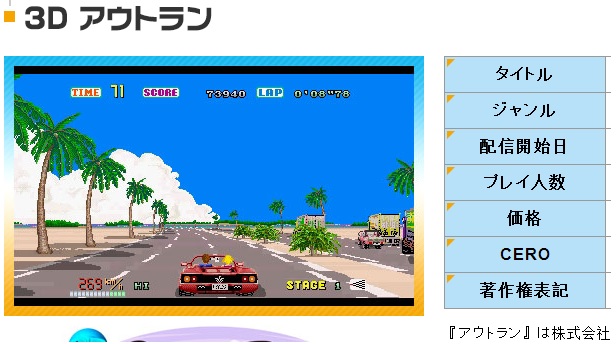 With all of those great extras in tow

Sega is doing what Ninten-dont with the 3D Classics line, giving old games new life on the 3DS. Not only did Nintendo basically stop making these a while ago, but Sega has topped their efforts with a number of options and extras, making their 3D Classics quite the enticing prospect.

The newest game to hit the eShop soon in Japan is Outrun, which is set to drop on April 23rd. What options are included, you might ask? Well there’s the typical save state support, as well as circle pad, d-pad, or touch controls, the choice between playing the Japanese or international version, and multiple audio or screen settings.

As you can plainly see, Sega did a fantastic job on these retro adaptions, and I wish other publishers followed suit.