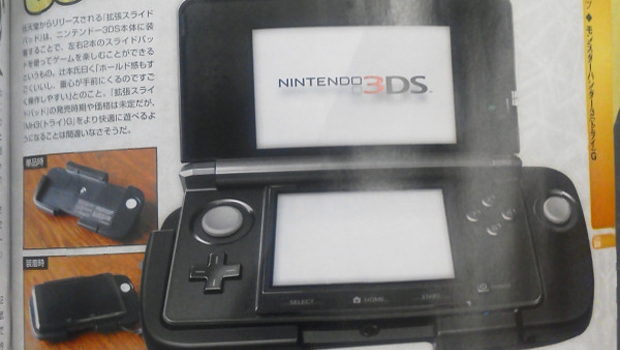 In the past hour, not one, not two, but three major gaming news outlets have posted stories reportedly gleaned from the latest issue of Famitsu (though no scans have popped up yet for confirmation). First up is word that a new Monster Hunter title is coming to the 3DS this year in Japan. Called Monster Hunter (Tri) 3G, this adaptation of Monster Hunter Tri will reportedly feature 12 weapon classes, underwater battles, local multiplayer, potential online components, a new “cover monster” named Blakidos, and compatibility with the 3DS’s new second circle pad attachment.

It’s this nub that already has fans, still watching and waiting for confirmation of this rumor, ready to freak out. The attachment is rumored to also include a trigger, and will sit next to the 3DS’s X, Y, A, and B buttons. If this rumor is true, it would make those other rumors of a dual-analog 3DS redesign all the more plausable.

Are you enraged over the prospect of a second circle pad? If so, will you please record a video of yourself angrily discussing the matter, spouting the word “nub” as frequently as possible, and leave it in the comments? Let’s revel in the fact that the videogame industry is the only place where nubs can cause deep feelings of hatred!