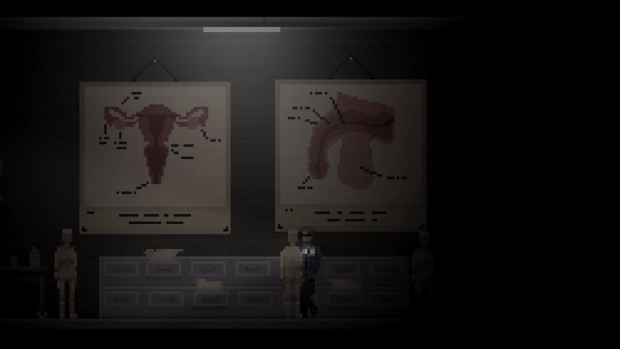 I’m sure those shadow things just want to be friends

Way back in April, we first heard about Uncanny Valley, and we all had a nice juvenile moment of pointing and snickering at pixelated medical diagrams of human genitalia. The trailer also showed slightly less funny stuff: darkness, meat hooks, and creepy demon things that look a little bit like the kid from Limbo.

Developer Cowardly Creations ran an unsuccessful crowdfunding campaign on Indiegogo, but still managed to get Uncanny Valley approved on Steam Greenlight. Despite not being able to secure public funding, the studio has still made progress to the point where a playable demo is now available to download.

I probably will not be playing it, because hanging meat creeps me out. Am I talking about the animal carcasses dangling from the ceiling, or the penis cross section poster? Answer: Yes.