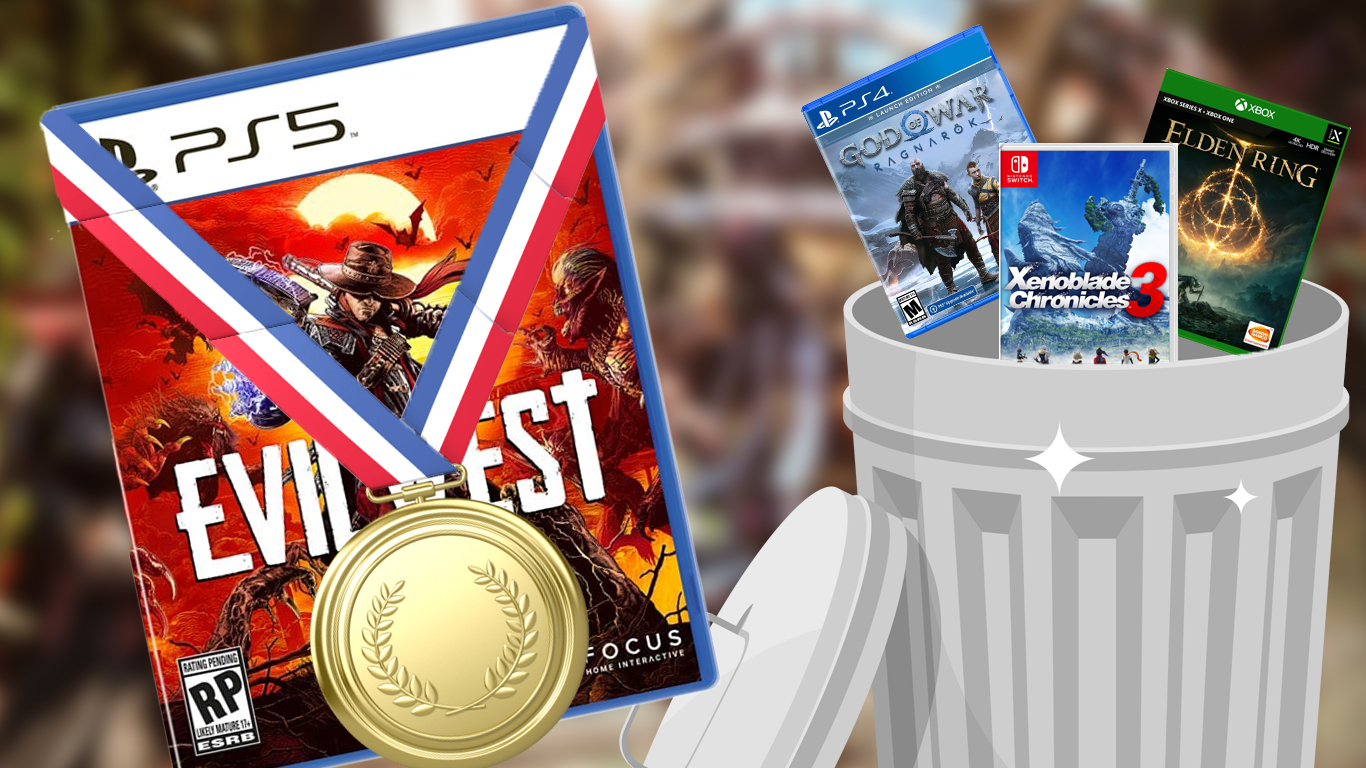 Let’s judge some books by their covers

I don’t have a steady history of creating end-of-the-year Top 10 lists for Destructoid because, well, it’s very rare that I actually play 10 games I’d want to write about and celebrate at the end of the year. Such is the life of a part-time games journalist. Most of my free time is locked up playing through games for review, and I think all my reviews for 2022 averaged out to around a 7, which doesn’t exactly make for an exciting, OMG kind of list.

My actual game of the year, Immortality, has already popped up on several of these things and I don’t think we need yet another writer droning on about its greatness. So I say to hell with actually ranking the games I played last year and instead show the world how shallow I can be by picking the 10 best games based solely on their outward appearance. Inner beauty doesn’t matter here, folks, it’s all about how sexy you are on the outside. And some of these game covers are goddamn gorgeous.

Besides, with more and more buying games digitally these days, we should celebrate the physical box art while we still can.

AI: The Somnium Files is a series that always seems to be playing the bridesmaid but never the bride. Kotaro Uchikoshi’s follow-ups to his celebrated Zero Escape franchise are some of the best adventure games on the market, with slick production values, whirlwind stories, and excellent voice acting. And yet, when it comes time for GotY time, they always seem to drop off everyone’s radar. It happened in 2019 with the original Somnium Files and it happened again this year with – nirvanA Initiative –. I’ll admit, I chose not to bring it up when we debated the nominees for Destructoid’s yearly awards. Thankfully, I really like what Spike Chunsoft did with the box art for – nirvanA Initiative –, so I’m happy to include it here on my stupid little gimmicky top 10 list.

Ghostwire Tokyo had a blink-and-you-miss-it brief bit of relevancy earlier this year when it launched on the PS5. Sadly, Elden Ring basically drank the milkshake of every non-Nintendo published title over the first four or five months of the year. A lot of people swear by the game, though. Me, I haven’t played it, but I do quite like the box art of the deluxe edition of the game. Great use of hues, shadows, and neon glow. Someday I’ll make the time to play this game, but probably only after it’s deeply discounted.

I love me a good sci-fi box art (or poster art), and in my opinion, nobody did it better this year than Mario + Rabbids: Sparks of Hope. This box art just screams, “An amazing adventure awaits.” It’s just a fun cover all around.

As a child of the ’80s and ’90s, I tend to latch onto nearly every retro collection from those decades that gets released on modern hardware. Sure, I barely play my copy of The Cowabunga Collection, but just seeing it on my shelf brings back such warm memories that I like having it around. I don’t have any such memories when it comes to Atari. The Atari 2600 burned out just a few years before I came into the world, and as such, I have no nostalgia for the games. I do, however, have a longstanding love of its name and logo.

The Atari brand is somehow both eternally retro and evergreen, the type of logo that is entirely of its era but also one some up-and-coming app developer would sketch out today. Any use of that logo gets me excited, which is why I love the Atari 50 box art. It’s clean, simple, and absolutely stellar. The multi-line font on the 50 is a beautiful touch. I have zero intention of ever buying this game because there are no good Atari titles, but I wouldn’t mind seeing that box art in my collection.

It’s not often an annual sports game has a great cover, but then again, it’s not often we see a player as brilliant as Shohei Ohtani. Shotime is arguably the most exciting player in the MLB right now (sorry, Aaron Judge) and an absolute hunk at that. The standard cover for the game is no different than what we’ve seen in years past, but the MVP Edition cover stands out. You might think it’s a bit cliche and predictable to give a Japanese player anime-inspired box art, but I think this looks amazing and I would love to see this kind of creativity moving forward.

Okay, now we’re getting into the good shit. I mean, just look at that fucking box art. That’s not video game box art, that’s the cover of a dogeared copy of an early ’80s Dungeons & Dragons handbook. The standard cover from Limited Run Games was a fine recreation of the iconic Castlevania box art, but in my eye this blows it out of the water. And that’s not always something you can expect from the Best Buy copies of Limited Run Games titles. Just look at what they did with the Windjammers 2 cover.

I’m going to keep it 100 and admit I didn’t know what Evil West was until I started searching box art for this list. Maybe somebody had mentioned it before, but I probably mixed it up with Hard West and forgot about it. I truly don’t know what this game is about — and given that it’s $60, I likely won’t until it pops up on Game Pass or PS+ — but I do know that I am 100% down with that box art. Just look at that beauty and tell me it’s not some glorious piece of art you’d find on the cover of a SNES title that’s now considered a rare gem.

The Switch port of NieR:Automata The End of YoRHa Edition is an absolute work of art and arguably one of the best ports ever to hit the platform. It also has some of the most beautiful box art of the year. Of course, you have to actually buy the game and flip it over to see it. But like the very best alternative box art, you likely won’t switch back to the original. The lush greens on the front of the alt cover absolutely draw you into this world, while the painted grays of the rear artwork tell a story of their own. Sadly, my cover art got a small tear in it when I switched to the alt cover, and I have the type of personality that will absolutely be driven insane by that minuscule imperfection until my time on this Earth is complete.

This one might be cheating seeing as Save me Mr Tako: Definitive Edition actually came out last year. However, the physical edition didn’t launch this year. In fact, the game arrived on my doorstep just days before Christmas, barely making the cut for a 2022 release. And that worked out well for me because this is actually the box art that inspired this whole Top 10 concept. I LOVE the artwork on this cover. I think it is some of the most beautiful and enchanting cover art I have ever seen. Just imagine the box art we could have got for Kirby and the Forgotten Land if Nintendo put this kind of effort into designing its packaging.

Card Shark turned out to be a love-it-or-hate-it type of game, but I think one thing everyone can agree on is how outstanding the artwork is for its physical edition from Special Reserve Games. In fact, I think the box art is so great, it’s the only reason I bought the game. I haven’t even bothered taking it out of the shrink-wrap. I just love looking at that box. I’m sure the game is fine, but this box art: wow. I am in love with this artwork. Get rid of the logos and nameplate and you have a piece of art I’d love to have framed on my wall.