And that’s not even including The Big N

As the year’s end shuffles into view, number-crunching firms are taking a look back at the last 12 months to recognize patterns, facts, and figures as they pertain to gaming, retail, prices, sales, and player behavior — And a new report from the statisticians at NewZoo offers up some interesting reading.

NewZoo places its estimate for the global games market value at a staggering $184.4 billion USD. This accounts for almost game sales, on PC, console, and mobile platforms. It should also be noted that this already impressive figure does not take into account Nintendo game sales, as the publisher has always been weirdly prudish when it comes to revealing its own bottom line. 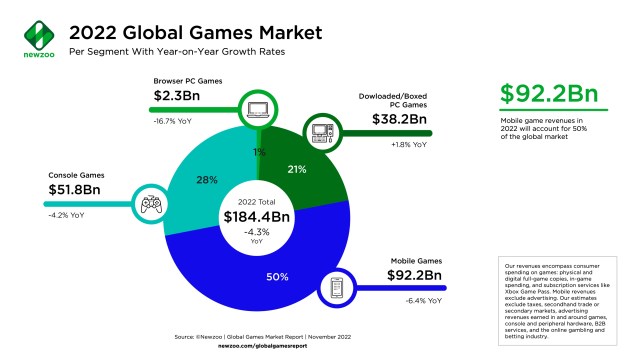 Of this total market value, $51.8 billion manifested through console games, with a further $38.2 billion pulled in by downloaded/boxed PC titles, and $2.3 billion from browser-based PC games. Of course, mobile gaming takes the lion’s share, with a massive $92.2 billion in total revenue. This sector was led by the continued dominance of titles such as TiMi Studios’ Honor of Kings, and PUBG Corporation’s PUBG Mobile, which continue to earn billions year-on-year from the global market.

When it comes specifically to console gaming, around 72% of all game sales were digital downloads, with only the remained 28% accounting for physical releases. This continues a trend we have witnessed for many years now, with each consecutive year seeing more and more customers opting for digital game purchases over boxed copies. Again, this figure does not include Nintendo Switch software, which represents perhaps the last real bastion of high-street retail gaming purchases.