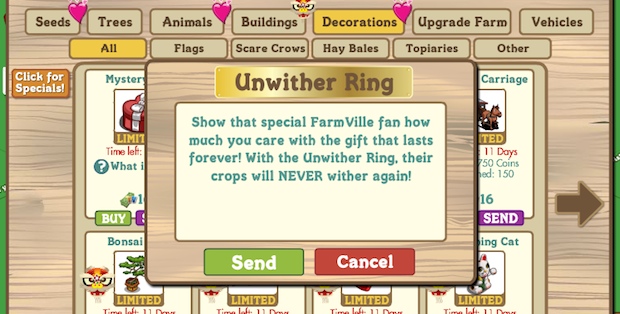 Edible flowers and plush teddy bears aren’t the typical add-on fair for Zynga Game Network’s FarmVille, but that doesn’t mean the studio isn’t offering something special for those who wish to buy their hopelessly addicted loved ones a Valentine’s Day gift.

Enter the “Unwither Ring,” a 40-something dollar gift that you can give whomever until February 14th. As described by Social Game Central, the virtual item is a bit of a game breaker — the person using it will never have to worry about their crops withering if they choose to step away from the game for a few hours. We’re of the mind that this is a great gift. After all, there is a world outside the office. But others, those without the ring namely, are apparently thinking otherwise. What’s your take?