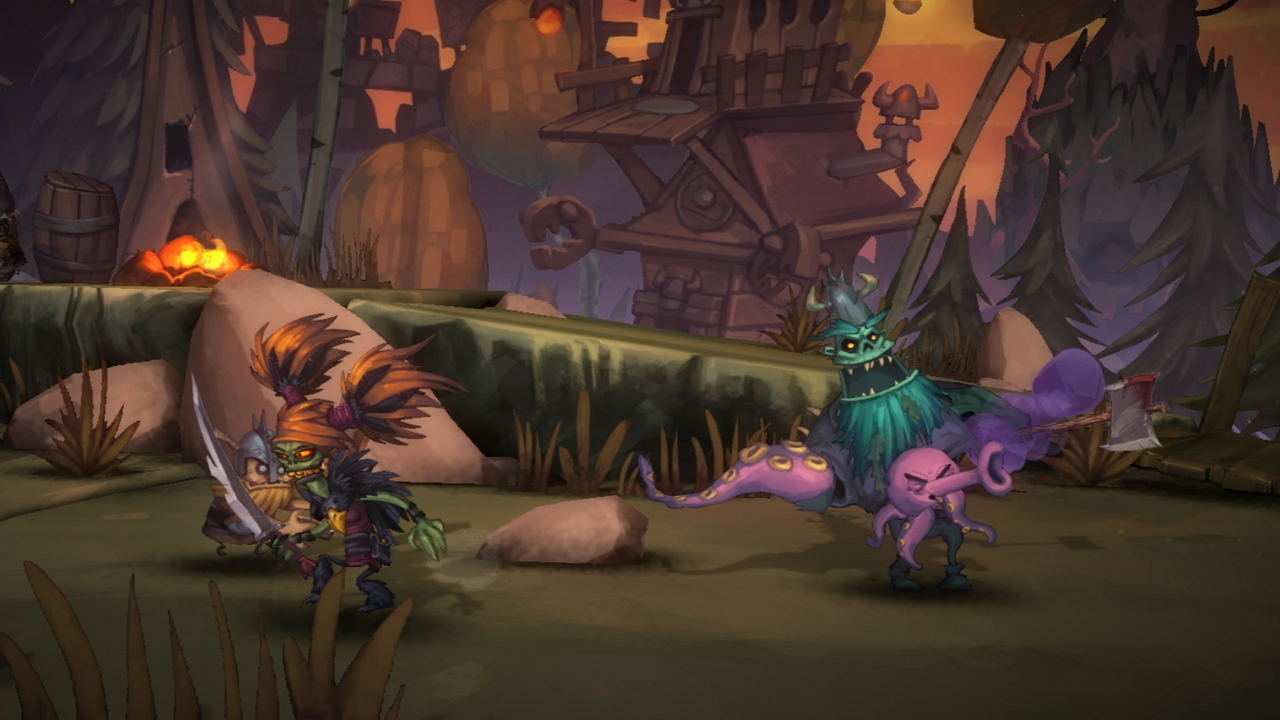 Are you a bad enough dude to stop Loki?

When people think of the beat-’em-up genre, they most likely recall the dimly-light streets of an urban metropolis filled with thugs and other roughnecks looking to cause trouble. While there are some other notable titles that move away from the contemporary setting, the city streets and modern era have become synonymous with the genre. Thankfully, we’re finally getting another brawler that takes things to a different setting — specifically, to the Viking era.

In Zombie Vikings, you’re tasked with fighting your way through the Norse Lands on a quest from Odin. I recentely had some time to check out this upcoming brawler with the developers from Zoink! Games, and I was quite pleased with its take on beat-’em-up conventions. With four players, you can wage war against baddies and other gnarly villains in hilariously off-the-wall fashion.

Set in a very goofy interpretation of the Viking era, the Norse god Odin has his last good eye stolen by the mischievous trickster Loki, and must unearth four undead viking warriors to chase after the rogue god and return his eye. Loki plans to use the eye for his own nefarious purposes, such the awful and evil act of playing beer pong, and Odin wants revenge. Over the course of their journey through the Norse lands, the Zombie Vikings will battle waves of monsters, creatures, and other oddities that will put their brawling skills to the test. But with their new zombie powers, they’ll be able to match up to the monsters that await, while also coming to terms with their troubled past lives.

Right from the opening cutscene, the game sets itself up as a humorous and cartoonish take on Norse mythology, and it was pleasing to see a game have some fun with the material. The art style is essentially like a 2D animated cartoon, complete with interludes where the characters bicker and talk amongst themselves. With the main story written by Zack Weindersmith, the creator of the Saturday Morning Breakfast Cereal webcomic, Zombie Vikings blends together brawler action with comedy. Over 90 minutes worth of cutscenes are spread across the thirty levels, and the story goes in places you’d least expect. While some of the jokes are hit-or-miss, it’s refreshing to see a brawler revel in its own ridiculousness. The game continually ramps up in oddball comedy, and it’s all the better for it.

As one of the four vikings, you’ll battle through several stages utilizing unique character skills and weapons which alter your performance. In similar vein to Castle Crashers, gold acquired from your journey can be spent on upgrades and new gear. As you travel through the land and complete stages, you can head back to old areas and tackle new challenges and side-quests that open up, yielding greater rewards. While there isn’t a leveling system or any other RPG mechanics, the items you can deck your character out with are plentiful, and allow for a great level of customization. Which is great, because each character has their own special playstyle.

During my session, I mostly stuck with Seagurd, a viking who’s corpse somehow fused with an octopus. Thankfully, it’s not just for show, as he’s able to use the tentacles for spin attacks and charged-up power moves which turn the small octopus on his torso into a massive monster that damages all nearby enemies. The other characters make up the more standard strength, speed, and technique archetypes for brawlers, and each of them not only shows a lot of creativity in their design, but also feels very different one another. Moreover, you can use certain skills together in unison, such as throwing your friends across the field and into a mob of foes where they can unleash a power attack. This adds another layer of strategy to combat, which can make the co-op nature of the game all the more appealing. You haven’t lived until you’ve seen four undead vikings stack on top of each other and rush deep into battle.

I’m a big fan of the brawler genre, and Zombie Vikings has got a lot going for it. Norse mythology is often ignored in gaming, so it’s a real pleasure to be able to explore the lands while battling monsters straight from lore, albeit in a really goofy, comedic way. The guys at Zoink! Games made a really fun title. Those looking for a four-player co-op beat-’em-up that doesn’t take itself too seriously will be intrigued by this one.