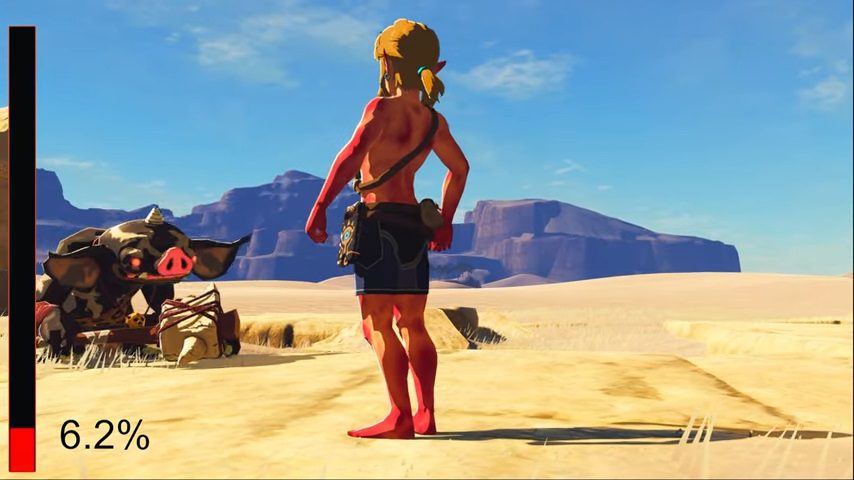 It normally only goes up to 4%, but someone modded more

Zelda: Breath of the Wild is the gift that keeps on giving: is something I’ve said quite a bit, but I mean it! Somewhere, someone is putting every facet of this game through its paces, ready to make another breakthrough discovery. That includes the Breath of the Wild sunburn mechanic.

The game’s desert area actually promotes a sunburn visual effect on Link if he stays out too long, something that players have been experiencing since the launch of the game. Normally the Breath of the Wild sunburn rating can only go up to 4%, max, but YouTuber Postposterous managed to push the results in the below video.

It’s something most people would never do, or never even think of to push to the extreme. In all my playthroughs of the game I didn’t notice this, and even if this concept is done fully through mods, it’s still pretty wild. What’s perhaps most interesting about this particular experiment is how different people are more in tune with different areas. Some folks really like the ice zones (which had visual effects I did notice, unlike the aforementioned sunburn) and spent so much time there they discovered all of its intricacies, including the bowling exploit. Others prefer the central area, and all of the riches involved, and so on.

Excuse me while I go to the desert in-game and stand in the hot sun for a while to see what happens.