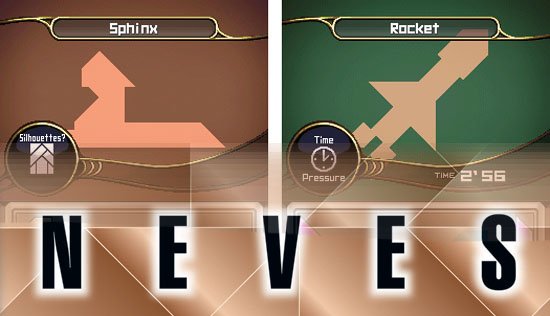 Our very own Topher loved Yuke’s Nintendo DS puzzle game NEVES, saying that “it’s like having a huge roll of bubblewrap to pop, only it won’t drive everyone around you crazy.” Then he scored it an eight out of 10. Children’s Technology Review, “a leading professional source of unbaised reviews of interactive technology for children,” agree and have given them game an “Editor’s Choice Award.” Fancy.

Additionally, Yukes has announced that the game will be receiving a price drop, and is now available for a very reasonable $19.99. If you’re not sure whether or not the game is your cup of tea, there’s now a Flash demo available on the Internet, so you won’t even have to leave your house. Or you can just take Topher’s word for it, beacuse that guy knows what he’s talking about most of the time.

As for me, I enjoyed NEVES but it made me realize that I’m either not very smart of have no patience. Ten or fifteen puzzle into the game I passed it off to my wife because I couldn’t solve a simple problem; she quickly completed the puzzle and played for another three hours. Way to make me feel stupid, NEVES.

CHICAGO, IL – March 20, 2008 – YUKE’S Company of America, subsidiary of Japanese game publisher YUKE’S Company Limited, announced today that NEVES, published by Atlus for the Nintendo DS, has received the highly coveted “Editor’s Choice Award” from the editors at Children’s Technology Review, a leading professional source of unbiased reviews of interactive technology for children. Additionally, YUKE’S announced that the unique puzzle game will receive a reduction in price to $19.99, effective immediately. NEVES is currently available at select retailers nationwide, including Amazon.com and GameStop.com.

Developed and published by YUKE’S and distributed by Atlus U.S.A., Inc., NEVES is a unique tangram puzzle game that challenges players to think critically as they align seven wooden block pieces and build figures that correspond to a silhouette, which range from a simple item like a sword or key to more complicated ones such as birds or airplanes.

Utilizing the touch screen features of Nintendo DS™, NEVES offers a challenging but relaxing puzzle experience to a broad audience of gamers. With over 500 different puzzles to choose from and four different modes including puzzle mode, count mode, time mode, and versus mode, players will have countless hours of fun solving puzzles of varying difficulty.