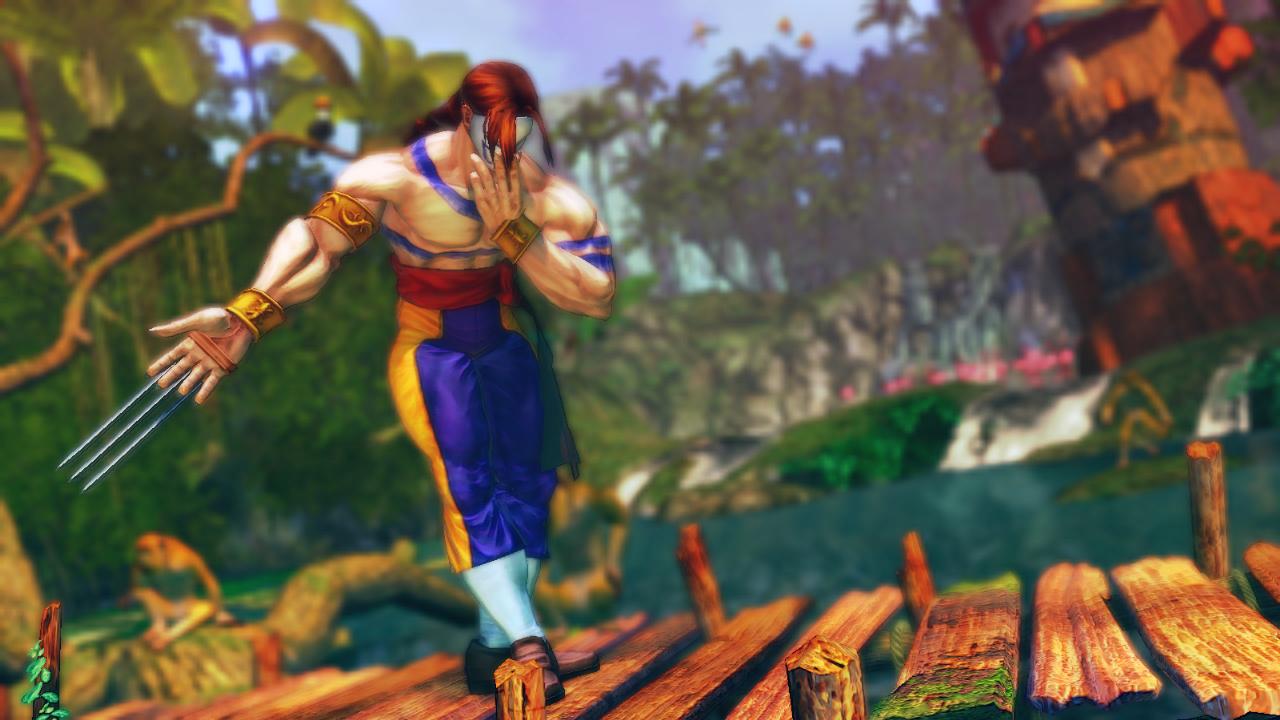 Have claw, will travel

When it comes to competitive multiplayer games, we all have our favorite characters and classes. In this series, I’m putting some of mine under the microscope to see what makes them tick, how they fit into their games, and ultimately why I like them! Check out the previous entries – Kotal Kahn, Reaper, Lex Luthor, The Hunchback. The Spy

If you asked me who my favorite Street Fighter character was anywhere between 1992 to 2010, I wouldn’t have even blinked. “Ken. Of course, Ken. What are you, stupid?”

Ken was my guy. Let’s be honest, he was probably the guy for any punk kid who thought he was king shit of Street Fighter because he could toss a Hadouken on command. The flashier half of the shoto-bros, and the go-to foil to my brother’s Ryu. A natural pick for anyone with an interest in looking cool and hitting mugs with huge uppercuts.

But something strange happened in 2010. Somehow, Ken, my lifelong fighter in the streets slipped off my radar and I found another character to play. It wasn’t a natural shift either, like going from Ken to Akuma, or Sagat, or some other character of the fireball+uppercut persuasion. No, I found Vega. Vega, the preening, masked weirdo of the cast.

Vega was never a character I played in earlier versions of Street Fighter. In Turbo he was a curiosity, a bizarre edge case character who yelped like a maniac and could cling to the fence of his stage like a spider monkey, the weakest of the four boss characters. In Alpha 3, he was an unknown, a character that nobody seemed to play. I was always vaguely surprised to square off against him in the arcade mode. “Oh yeah, Vega is in this…” (although it must be said, he had the best theme in the game). He was a no-show in SFIII like the rest of Shadowloo, and to be honest, the most easily forgotten of the non-returning characters.

But in SFIV, (or more specifically for me, SSFIV) he was something else. A fascination that somehow developed into something of an obsession for me. Vega was never the strongest character in SSFIV, but he was one of the weirdest, and apparently, that counts with me.

One of the great things about Vega is that he can do a ton of stuff. There are plenty of street fighters with long and varied special move lists, but I’m not sure any are quite as odd as Vega’s. He has all these fanciful ways to move around the screen, attack opponents from weird angles, and manipulate space.

The trick is, most of the time these moves suck.

Seriously, moves like his Flying Barcelona attack can send him all over the screen through the air, letting him land and attack anywhere. But, in a game dominated by Shoryukens and focus attacks, floating around like a malfunctioning weather balloon is just an invitation to eat a fist. His back flip (two different varieties) will let him pass through fireballs and escape some situations, a mainstay of the character. But, it’s so slow and oddly spaced in SFIV that more often than not, he’ll just land on top of the very projectile he was trying to avoid. Or worse, his opponent will just walk up and punch him when he lands. He has a forward advancing slide for a sweep, and that sounds cool until you realize it has some of the worst block disadvantage in the game. He has a wall jump, but it’s stubby and a little unreliable. Just a weird bag of tricks.

He even has a bonus taunt move. A taunt move. If you’re winning and want to show off, Vega can dramatically toss his claw into the air on command, just to show he doesn’t need it. Hell, want to really rub it in? Burn a bar of meter for the same move and Vega will toss off his mask instead. It doesn’t get any more insulting than wasting meter on a move that is literally incapable of damaging the enemy. This is Dan-level trolling for a supposedly serious character.

He’s just such a weird fighter. His little hops, his Cosmic Heel kick that awkwardly propels him a character length forward (and over low-hitting moves), his slow, plodding roll. But somehow, it all works.

That’s the beautiful thing about Vega. 90% of the time 90% of his moves are a bad idea – but when you use them right, they make him one of the slipperiest fighters in the game.

You have to keep mixing them up too, reach deep into that bag of tricks. He has no single strategy or fallback tool like so many other characters in SFIV can rely on. I don’t say this to take anything away from any other character (every member of the roster has depth and nuance), but most have some move or ability that forms the core of their strategy. Guile tosses Sonic Booms to pressure his opponents into making foolish mistakes. Akuma can stifle the opposition with air fireballs and a strong vortex once he scores a knockdown. Yun and Rufus have their dive kicks. Ken has jump back+Hadoken punctuated by SHORYUKENS, and so on.

Vega has… je ne sais quoi? He always, always, has an answer for a situation, but never an autopilot path to victory. I’m not trying to say he’s weak (I place Vega mid-tier, leaning on the strong side), just different.

Maybe other players would disagree, but I played Vega for years and never found a single dominant strategy. What I did find though was tricks and gimmicks.

Vega has a huge arsenal of small, goofy ways to generate damage. Little things like using the EX version of his Sky High Claw (a flying, claw-first torpedo) to blow through fireballs or cross-up an opponent as they get up. A trick that is guaranteed to work once a match and only once a match. He can scheme on the deceptive range of his overhead, reaching just a tiny bit further than it looks. So called “corpse hopping” using his overhead or Cosmic Heel to hop over a recovering opponent for a quasi-cross up/confusing situation. And of course, his kara-grab – the ability to sneakily extend the range of his throw by canceling the first frames of his fierce kick into a grab. The best in the game for my money’s worth.

Combine these tricks with his other weird tools and a gameplan starts to emerge. His unrivaled poking and footsies game is enforced by using his air grab to police the skies. Using his lackluster slide to not to attack, but to avoid certain vortex situations or aerial projectiles other characters just had to deal with. Learning how to weave in the occasional roll or Flying Barcelona Attack unexpectedly – completely punishable moves he could get away with on a properly confounded opponent.

Not only do these tools make Vega deceptively strong, they fit his personality.

Street Fighter as a series loves to bolt extra bits to its characters, to cram a little more story into its already bulging seams. The Alpha series features three full games worth of prequel backstory for what is essentially a fancy martial arts tournament. SFIV is supposed to take place in some nebulous gap between SF2 and SFIII, and in turn, SFV is supposed to take place in the increasingly narrow gap left between IV and III.This isn’t even counting canon established in the various anime and comic series.

Vega’s backstory and character is a particularly egregious example of that bloat. He’s a Spanish ninja/bullfighter/aristocrat/serial killer/assassin for hire with a narcissism complex. That’s a lot of character baggage to unpack, and I’m not even gonna try, I don’t have all day to cut through that mess. But, if there is one thing that tangled knot of a backstory can tell us it’s that Vega is not a fighter who plans to enter the ring and participate in a some good clean fisticuffs.

He’s a sadist. It’s one of the few consistent qualities of his character. He’s a sly cat that fully intends to play with the mouse he’s caught. He is going to peck and poke at an opponent, dragging out the torment before moving in for the kill.

He’s going to fight dirty. It only feels right that he’s constantly pulling out new and different tricks, always changing the pace and flow of the match. You can’t get comfortable fighting against someone like that. He makes your skin crawl.

Have you ever played against a skilled Vega player? I have, it’s maddening. The entire reason I picked Vega up as a character in the first place was because some online masked murderer frustrated me to the boiling point where I either had to understand how he did what he did, or throw my fightstick through the drywall, and I’m not handy enough to patch up drywall.

Nevermind his convoluted backstory, the odd go-nowhere sub-plots with Chun Li and Cammy. Or his increasingly difficult to discern role in a paramilitary organization like Shadowloo. He fights like you would expect a shithead sadist to fight. The details don’t matter, he plays his part.

As I’ve written these pieces, I’ve noticed this is a recurring theme in the characters I truly adore. It isn’t just about their moveset, their placement on the tier list, or most damaging combo. But, it isn’t about their backstory, their arc, or motivations either.

It’s the synthesis of the two qualities that gets me excited. When a character plays in a way that feels like an extension of their personality. That’s when I make a connection. That’s when I fall in love with a character.

I never quite dug into SFV. The shaky launch, bungled story mode, and plasticine art style kept me from embracing the title like I wanted to. Vega is a different character in that game, a character I don’t recognize. Gone are the familiar charge moves he’s had since ‘92. Gone are some of his strongest pokes. After spending so much time learning the in’s and out’s of his kit in SFIV, picking him up in SFV feels slightly uncomfortable.

But, he does have a command grab. A stance change mechanic to stow or reveal his claw. He has a get-out-of-jail move in the form of a V-reversal, and a deadly rose he can throw like some kind of malicious Tuxedo Mask. He might not be the same fighter from SFIV, but he’s still weird. And that still counts with me.

Maybe I’ll finally give the devil his due when Arcade Edition drops.